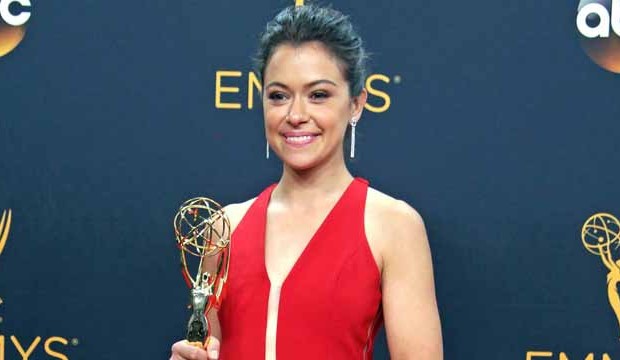 Reigning champ Tatiana Maslany will not be eligible to compete at the 2017 Emmy Awards. BBC America just announced that her show “Orphan Black” is not returning until June 10 for a fifth season, and that’s too late for this year’s Emmys.

The television academy uses an eligibility calendar of June 1, 2016 through May 31, 2017 for the next award’s ceremony. While “Orphan Black” did air three episodes last June, they were used as part of the Emmy “hanging episode” rule that combines them with the others from the fourth season that premiered during spring of 2016.

Maslany was the Best Drama Actress winner this past September for playing several clones on the sci-fi program. She defeated Claire Danes (“Homeland”), Viola Davis (“How to Get Away with Murder”), Taraji P. Henson (“Empire”), Keri Russell (“The Americans”), and Robin Wright (“House of Cards”). All five of those ladies will be eligible to return for the next cycle.

Who might be the person most likely to take the slot abandoned by Maslany? From rookie shows, possible contenders (depending on lead vs. supporting placements) could be Christine Baranski (“The Good Fight”), Millie Bobby Brown and Winona Ryder (“Stranger Things”), Jenna Coleman (“Victoria”), Claire Foy (“The Crown”), Diane Keaton (“The Young Pope”), Mandy Moore (“This Is Us”), Elisabeth Moss (“The Handmaid’s Tale”), and Thandie Newton and Evan Rachel Wood (“Westworld”). Returning shows might provide Lizzy Caplan (“Masters of Sex”), Carrie Coon (“The Leftovers”), Vera Farmiga (“Bates Motel”), Michelle Monaghan (“The Path”), Taylor Schilling (“Orange is the New Black”), Kerry Washington (“Scandal”), and Ruth Wilson (“The Affair”).

Sound off on Emmys 2017 in our notorious TV forums

Emmy voters might be surprised to see so many of their drama favorites omitted from the ballot this summer. Two-time defending Best Drama Series winner “Game of Thrones” will be gone because it will premiere in the summer. That show also won for the directing and writing categories plus had acting nominations for supporting stars Peter Dinklage, Kit Harington, Emilia Clarke, Lena Headey, and Maisie Williams. Perennial series nominee “Downton Abbey” had a final season in 2016 so it is out, as is last year’s Best Supporting Actress champ Maggie Smith. Netflix has not yet announced if a third season of “Bloodline” will debut by the end of May, so that could eliminate 2016 Best Supporting Actor winner Ben Mendelsohn and leading nominee Kyle Chandler. In fact, the only major drama champ from last year that is confirmed to compete is Best Drama Actor winner Rami Malek (“Mr. Robot”).