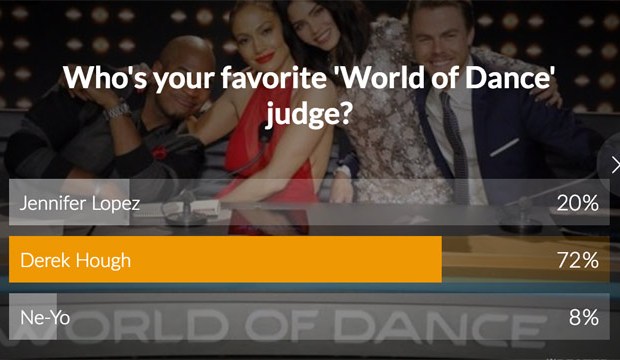 Derek Hough is your favorite judge on NBC’s hot new reality series “World of Dance,” according to a staggering 72% of fans who voted in our recent poll. It should come as no surprise that the popularity of this six-time “Dancing with the Stars” champ has extended to his latest gig on the judges’ panel. Hough, who is arguably the most famous professional dancer on the planet, has been charming audiences for over a decade with his Emmy-winning routines and movie star good looks. How did the votes fall for the other two “World of Dance” judges?

Next up in our poll is the show’s executive producer, superstar Jennifer Lopez, with 20% of the vote. Lopez was the main advertising focus for the weeks leading up to the season premiere, but perhaps she’s not the top draw producers thought she was. Nonetheless, it was Lopez who fought to bring this series to NBC and for that much respect is deserved. The former “American Idol” judge also brings years of experience scrutinizing talented young artists.

In last place with the support of just 8% of our readers is R&B singer Ne-Yo. The Grammy winner has been consistently more critical than his peers on the panel and made it clear he isn’t afraid to be brutally honest with acts that don’t impress him. And to be fair, Ne-Yo also has the least amount history on television and it may take time for viewers to warm up to him as reality TV’s newest personality.

Do you agree with our poll results that Derek Hough is the best judge on “World of Dance” Season 1? Be sure to sound off down in the comments section, and keep watching “World of Dance” every Tuesday on NBC.

Did Derek Hough do Len Goodman proud as a judge on 'Dancing with the Stars'? [POLL]

'Dancing with the Stars' season premiere recap: Who stood out on the first night of a highly unusual…

Update your 'Dancing with the Stars' predictions: How will Derek Hough do as judge?