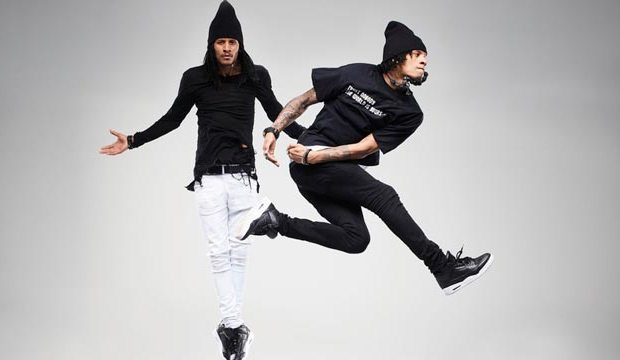 The duel rounds continued on “World of Dance” Tuesday night with some of the top qualifying acts from each division choosing a rival to battle head to head in order to advance in NBC’s reality TV competition. Once again judges Jennifer Lopez, Derek Hough and Ne-Yo were on hand to score each act up to 20 points in five categories: Performance, technique, choreography, creativity and presentation, for a maximum score of 100. Below, read our recap of “World of Dance” Season 1, Episode 5.

After providing emotional support throughout rehearsals, host Jenna Dewan Tatum was back to deliver results to the contestants who are divided into three categories: Upper (at least 18 years old and up to four members), Team (at least 18 years old and more than four members), and Junior (under 18 years old). The acts with the highest score earned a spot in the next round while the losers were sent home. Here is my ranking of the four duels from Tuesday night, from top to bottom.

1. Les Twins vs. Kyle Van Newkirk (Upper) — The top scoring act from the qualifying round, Parisian hip-hop duo Les Twins, decided to take world tap champion, Kyle Van Newkirk, into the ring for the hottest duel of the night. As the underdog, Van Newkirk brought a heightened sense of urgency to his performance. He boldly worked the stage and added tricks with a cane he brought along as a prop for more visual theatrics. The rhythms projected from the stage using both his feet and the cane allowed for audible evidence of his impressive talents. On the other hand, Les Twins delivered the most fascinating, twisted, borderline disturbing performance of the night. Their movement is so intertwined it became evident these two have danced together since birth. I’ve never seen anything quite like Les Twins and I just want to watch them again and again. They continued their reign atop the leader board by taking out Van Newkirk 92 to 86.

2. Diana Pombo vs. The Posse (Junior) — The small but mighty 11-year old, Diana Pombo, took on the young female troop with a powerful message, The Posse, in the night’s first duel. The Posse delivered a tight, clean performance using a rope to convey the message of struggling through life. But even though they have seven members on stage to ramp up the visuals, the performance lacked excitement. With her contemporary piece, Pombo put her technique and flexibility on display while delivering a powerful performance like a warrior princess. Pombo’s ability to connect emotionally led her to a 91.3 to 86 victory over The Posse and a standing ovation from Lopez.

3. Super Cr3w vs. Royal Flux (Team) — World champion B-boy crew Super Cr3w chose to duel contemporary newcomers Royal Flux for a team battle of contrasting styles. Super Cr3w kicked things off with a high-energy spectacle that was full of difficult tricks from beginning to end. The Michael Jackson-inspired number brought a cleanliness and synchronicity to hip-hop that impressed the judges. Royal Flux brought a more mellow feeling to the stage but weren’t lacking in difficulty. The team incorporated straps of cloth on their costumes to perform unique and complex holds. But the excitement of Super Cr3w won out in the end as they defeated Royal Flux 89 to 86.3.

4. The Lab vs. Boys of Temecula (Junior) — The top scorers from the qualifying junior division, The Lab, chose to battle it out with the young jazz troop, Boys of Temecula for a pint-sized duel of epic proportions. The Lab didn’t pull any punches delivering a hip-hop routine inspired by a boxing match that was both fun and impressive to watch. These adorable kids were full of funk and attitude from top to bottom. For their part, Boys of Temecula gave a charming performance dressed in a rainbow of colors that filled the stage. The routine was unquestionably entertaining but it lacked the depth and complexity it would take to win this competition. The Lab won this duel convincingly, defeating Boys of Temecula 89.7 to 84.7.