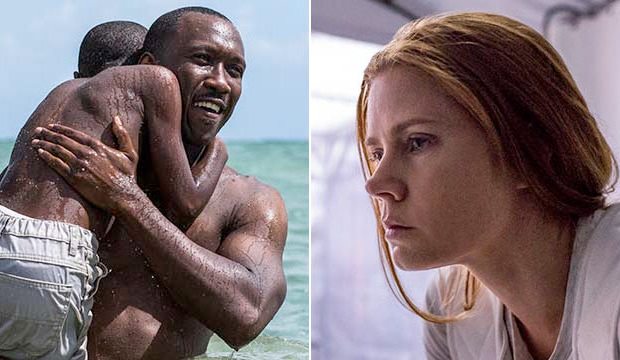 A24 and Paramount Pictures

The 69th annual edition of the Writers Guild of America Awards was held simultaneously in Los Angeles and New York City on February 19. As Gold Derby predicted, “Arrival” won Best Adapted Screenplay, but there was a surprise for Best Original Screenplay as “Moonlight” prevailed over “Manchester by the Sea” and “La La Land.” What does this mean as we head into the Oscars?

“Moonlight” scribes Barry Jenkins and Tarell McCraney, who just won for their original screenplay at the guild, must contend at the Academy Awards for Best Adapted Screenplay as that writers branch ruled their script to be an adaptation as it was based on an unproduced play by McCraney. Meanwhile, “Manchester by the Sea” writer/director Kenneth Lonergan remains the Oscar frontrunner in the race for Best Original Screenplay.

As the WGA Awards only consider screenplays written under the guild’s guidelines or those of several international partners, two leading Oscar contenders were ruled ineligible for consideration: the adaptation of “Lion,” which won the BAFTA, and the original script for “The Lobster.”

The other original screenplay WGA nominees were the Oscar-contending “Hell or High Water” and “La La Land” as well as “Loving.” That Oscar race is rounded out by “20th Century Women.”

Elsewhere, Best Documentary Screenplay honors went to “Command and Control.” As with last year, none of the five Oscar nominees for Best Documentary Feature were in contention for this award.

Among the TV winners, FX had a great evening thanks to “The Americans” winning Best Drama Series and “Atlanta” taking the award for Best Comedy Series on its first at-bat, stopping HBO’s “Veep” from claiming its third win in four years (“Louie” won in 2014).

Different shows won the episodic prizes, which honored the best individual episodes of TV programming. NBC’s “This Is Us” won Best Episodic Drama for the episode “The Trip,” while Netflix’s “Unbreakable Kimmy Schmidt” claimed Best Episodic Comedy for “Kimmy Goes on a Playdate!”

NEW: Oscar odds in all 24 categories

Will the third time be the Emmy charm for 'Saturday Night Live' star Kenan Thompson?

Milo Ventimiglia ('This is Us') on Jack 'opening up' about his father and directing 'Jerry 2.0' episode…

Siddhartha Khosla ('This is Us' composer): 'It feels like I'm making an album every week' [EXCLUSIVE…