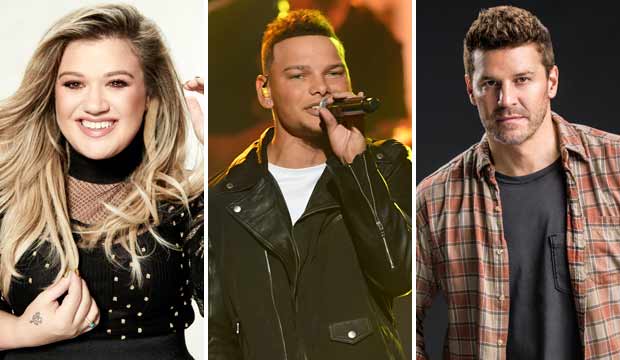 On March 29 the Academy of Country Music Awards announced another list of performers who will take the stage for the live telecast on Sunday night, April 15, on CBS: Kane Brown, Kelly Clarkson, Alan Jackson, Little Big Town and Jon Pardi. In addition the ACMs have also revealed additional presenters who have been invited to the event: David Boreanaz, AJ Buckley, Cam, Sam Elliott, Eve, Ashton Kutcher, Dustin Lynch, Max Thieriot and Kiefer Sutherland.

Kelly Clarkson is best known as a pop singer and now as a coach on the reality series “The Voice,” but she’s also a two-time ACM winner for her country music ventures. She was awarded Single Record of the Year and Vocal Event of the Year in 2012 for “Don’t You Wanna Stay,” her collaboration with Jason Aldean. And Clarkson received additional Vocal Event noms for “Because of You” with Reba McEntire in 2008 and “Don’t Rush” with Vince Gill in 2013.

Kane Brown is a nominee this year. He contended for New Male Vocalist of the Year for the second year in a row, though it was already announced that he lost that prize to Brett Young. But he does have another chance at a win as he also contends for Vocal Event for “What Ifs” with New Female Vocalist champ Lauren Alaina.

Jon Pardi is another relative newcomer at the ACMs. He won New Male Vocalist in 2017, and this year he has two nominations, but in a big category: he’s up for Album of the Year as both artist and producer of “California Sunrise,” his second studio album.

Little Big Town are nine-time ACM winners, including Vocal Group of the Year for four of the last five years. They’re up for that award again this year, along with Album of the Year for “The Breaker” and Single Record for “Better Man.” And Alan Jackson is a country music legend with 19 total awards from the Academy of Country Music, though he has no bids this year.

'The Voice' bloodbath: Which elimination shocked you the most during Battles Week 2? [POLL]