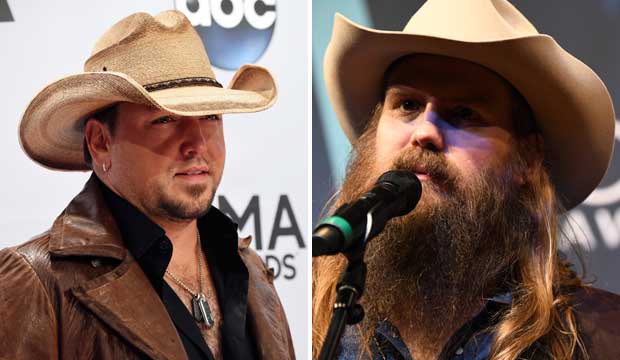 Jason Aldean will win Entertainer of the Year at the 2018 Academy of Country Music Awards held this Sunday, April 15. But he won’t be the biggest winner at the ACMs. According to our predictions, Chris Stapleton will come away with a leading three prizes on a night when the academy is expected to spread the wealth. Scroll down to see our complete predictions by artist.

These predictions are based on the combined forecasts of hundreds of Gold Derby users who have entered their picks in our predictions center. That includes the Editors who cover awards throughout the year for Gold Derby, the Top 24 Users who had last year’s very best ACM predictions, and the All-Star Top 24 who had the best predictions when you combine the last two years’ ACM results.

There’s not much Aldean can win besides Entertainer of the Year. He’s won it for the last two years in a row, but this year his only other nomination is Male Vocalist of the Year, which is expected to go back to Stapleton after Thomas Rhett upset him in that category last year. Stapleton is also the front-runner for Album of the Year for “From A Room: Volume 1,” for which he would be honored as both artist and producer.

Sam Hunt is next in line with two projected victories: we think he’ll claim Song of the Year for his crossover hit “Body Like a Back Road.” And as with Stapleton’s expected Album prize that’ll be two ACM Awards for the price of one for Hunt as he’ll be honored as artist and songwriter.

Little Big Town are also tipped to win twice. They’re the front-runners for Vocal Group of the Year, which they have won four times in the last five years (2013, 2015-2017). They’re also the favorites for Single Record of the Year for “Better Man,” which recently won them a Grammy for Best Country Duo/Group Performance.

Find out who else will take home prizes below. And if you disagree with our predictions there’s still time to make or update your own right here before awards are handed out.

JASON ALDEAN
Entertainer of the Year

TIM MCGRAW AND FAITH HILL
Vocal Duo of the Year

THOMAS RHETT
Video of the Year — “Marry Me” (Artist)