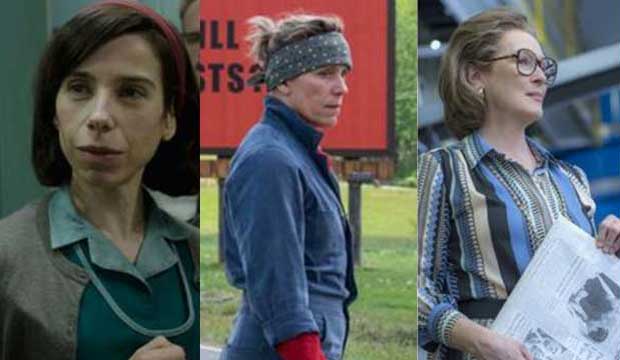 The 2018 BAFTA Awards nominations were announced on Jan. 9. Historically, about two-thirds of the contenders here go to reap Academy Awards bids. And with the two academies sharing about 500 voters in common, the BAFTAs are an important campaign stop on the road to the Oscars. This year’s BAFTA ceremony will take place at London’s Royal Albert Hall on Feb. 18, two days before Oscar voters begin final voting. (See the full list of BAFTA nominations.)

So how do this year’s BAFTA Awards nominations affect the Oscar race? Let’s consider who’s up and who’s down.

“The Shape of Water”
It earned more BAFTA nominations (12) than any other film this year. Granted, that didn’t help “La La Land” last year. It won five of its leading 11 BAFTA bids including Best Picture but was overtaken at the Oscars by “Moonlight,” which had lost all four of its BAFTA races. In combination with the upcoming Critics’ Choice Awards, where “The Shape of Water” leads with 14 nominations, the film is  firmly established as one of the top contenders at the Oscars for Best Picture and Best Director (Guillermo Del Toro).

“Blade Runner 2049”
This sequel to the 1982 sci-fi classic “Blade Runner” had under-performed this awards season. That it earned eight nominations from the BAFTAs, including for director Denis Villeneuve, is not that surprising given the way in which the British academy embraced the original with three wins from eight bids. But be warned, “Blade Runner” lost both of its Oscar races.

“Darkest Hour”
From the start of awards season, Gary Oldman has been the Oscar Best Actor frontrunner for his portrayal of British Prime Minister Winston Churchill. However, the film hadn’t done very well in the precursor awards stateside. It reaped a whopping nine nominations from the British academy, giving it a boost at just the right time.

“Three Billboards Outside Ebbing, Missouri”
After sweeping the Golden Globes on Sunday, the film maintains its momentum during Oscar voting week with nine nominations from the British academy, including Best Picture, two bids for writer/director Martin McDonagh, and three of the players: lead Frances McDormand and supporting actors Woody Harrelson and Sam Rockwell.

“Get Out”
This Oscar frontrunner was all but shut out here, with nominations only for leading man Daniel Kaluuya and director Jordan Peele‘s original script. But remember that “Moonlight,” another film helmed by an African-American, under-performed here last year.

“Lady Bird”
As with Peele, Greta Gerwig was snubbed for Best Director but did get cited for her original screenplay. Lead Saoirse Ronan and supporting actress Laurie Metcalf were nominated by the British academy but the film could not break into Best Picture. Granted, unlike the Oscars which will nominate between five and 10 films, BAFTA only cites five.

“The Post”
Between them director Steven Spielberg and stars Tom Hanks and Meryl Streep have four BAFTA Awards from a whopping 31 nominations. They won’t be adding to those totals this year as their film was shut out completely. Perhaps the fact that it was only finished in late November hurt.

“Call Me by Your Name”
It did receive four top nominations: Picture, Director (Luca Guadagnino), Actor (Timothee Chalamet) and Adapted Screenplay. And it’s one of only three films — along with “The Shape of Water” and “Three Billboards” — to be nominated for both directing and writing. However, it couldn’t break through below-the-line, which indicates limited support.

“Dunkirk”
Not surprisingly, this epic film about a pivotal moment for Britain in World War II reaped eight nominations, including Best Picture and for director Christopher Nolan. And it did well with the craft award. However, it would have been helped by a screenplay nomination and recognition for the performance of Sir Mark Rylance.

SEE 2018 BAFTA Awards: ‘The Shape of Water’ dominates with 12 nominations, ‘Darkest Hour’ and ‘Three Billboards’ at 9