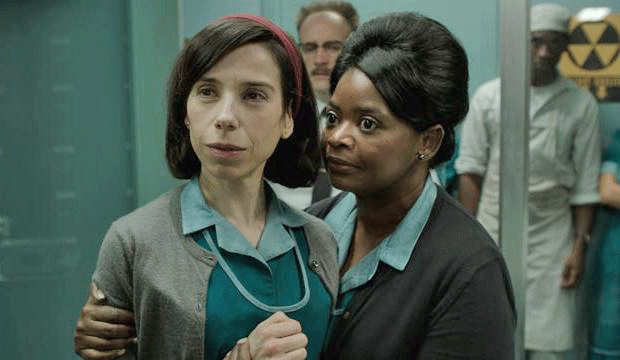 Following close behind are “Darkest Hour” and “Three Billboards Outside Ebbing, Missouri.” Both contend for Best Picture as do “Dunkirk” and “Call Me by Your Name.”

Along with its Best Picture bid, “Call Me by Your Name” is up for Best Director (Luca Guadagnino), Actor (Timothée Chalamet) and adapted screenplay.

Daniel Day-Lewis and Lesley Manville earned bids for their lead and supporting roles in “Phantom Thread,” which is also nominated for costume design and score.

Saoirse Ronan and Laurie Metcalf were cited for their lead and featured roles in “Lady Bird,” which is also up for Best Original Screenplay.

Hugh Grant nabbed a nom for his scene-stealing role in “Paddington 2,” which is also up for Best Adapted Screenplay and Best British Film.

“Get Out” is recognized for its leading man Daniel Kaluuya and original screenplay.

Also receiving nominations are supporting actors Willem Dafoe (“The Florida Project”) and Christopher Plummer (“All the Money in the World”).

While the BAFTA nominations were announced three days before Oscar nominations voting ends on Friday (Jan. 12), the winners will be revealed on Feb. 18 (two days before final Oscar voting begins). The 90th annual Academy Awards take place on Sunday, March 4.