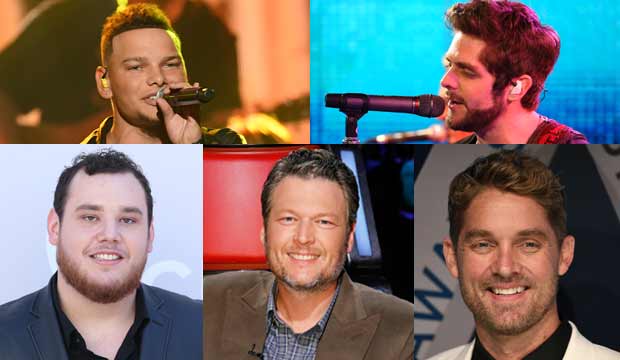 The 2018 CMT Music Awards will be handed out on Wednesday night, June 6, at the Bridgestone Arena in Nashville, Tennessee. So who will take home the awards? Scroll down for our complete predictions in eight categories, which are based on the combined forecasts of Gold Derby users who have entered their picks in our predictions center. They’re ranked in order of their racetrack odds, with the projected winners highlighted in gold.

These awards are decided by fans voting online for their favorite achievements in music videos. Carrie Underwood has won Video of the Year a record six times, and she was nominated again this year for “The Champion” featuring Ludacris. But CMT announced on the morning of the awards that the race had been narrowed down to the final 5 candidates from the 12 who started when the nominations were announced, and Underwood wasn’t on the list.

The final contenders are Blake Shelton (“I’ll Name the Dogs”), Thomas Rhett (“Marry Me”), Brett Young (“Mercy”), Kane Brown featuring Lauren Alaina (“What Ifs”) and Luke Combs (“When it Rains it Pours”). None of those artists has ever won the top prize, so we’re guaranteed a first-time champ. Also missing the final cut were Bebe Rexha featuring Florida Georgia Line (“Meant to Be”) and Justin Timberlake feat. Chris Stapleton (“Say Something”). Of the remaining contenders, Rhett had the best odds according to our predictions before the field was narrowed.

So what do you think? Is Rhett now the man to beat? Check out our predictions below, and make or update your own right here before the winners are announced.

“Stand Up for Something,” Andra Day, Common, Little Big Town, Lee Ann Womack and Danielle Bradbery at 2017 CMT Artists of the Year — 23/10

“Everybody,” Backstreet Boys and Florida Georgia Line at CMT Crossroads — 12/5