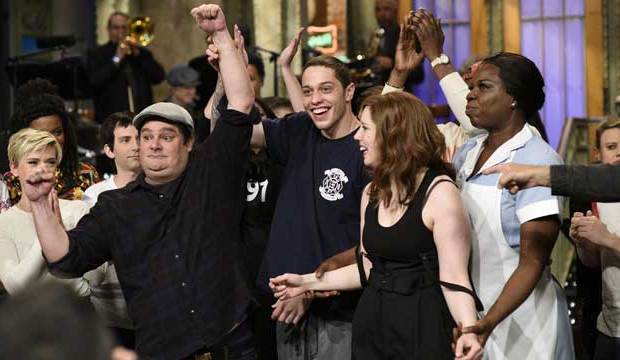 “Game of Thrones” was the big winner at the Creative Arts Emmys on Saturday night, September 8. But now it’s time to get back to reality — literally. The second half of Creative Arts took place on Sunday night, September 9, when the focus turned to reality shows, variety series and specials, and nonfiction and documentary programs. So who won, who lost, and who (if anyone) made history? Find out below in our live blog with all the minute-by-minute results as they’re announced. Check out the complete list of winners here. And watch our live webcast here for immediate reactions and commentary.

These awards had the potential for an unprecedented five EGOT coronations in the space of just a couple of hours. John Legend, Andrew Lloyd Webber, Tim Rice, Justin Paul and Benj Pasek came into this ceremony needing just an Emmy to complete their grand slams of Emmy, Grammy, Oscar and Tony Awards. Legend, Webber and Rice were nominees for Best Variety Special (Live) as producers of the NBC production of “Jesus Christ Superstar.” And Pasek and Paul were up for Best Music and Lyrics for their song “In the Market for a Miracle” from “A Christmas Story Live.”

And there were also ample opportunities for “Saturday Night Live” to extend its record as the most awarded program in Emmy history. Leading into Sunday night the NBC sketch comedy had a whopping 65 wins over the course of its 43-year run, including Saturday’s Best Comedy Guest Actress victory for Tiffany Haddish. It had another 11 nominations on Sunday, including Best Variety Series Writing and Best Variety Series Directing. How much higher did it go? Find out below. The event starts at 7:00pm Eastern/4:00pm Pacific (all times listed below are Eastern).

7:23pm — “Anthony Bourdain: Parts Unknown” wins Best Nonfiction Writing for the episode “Southern Italy.” Anthony Bourdain himself was the writer, so this is his first posthumous win of the night. He could win Best Informational Program later this evening.

7:27pm — Second win in a row for “Parts Unknown.” It also wins Best Picture Editing (Nonfiction) for the episode “Lagos.”

7:29pm — It may have been shockingly snubbed at the Oscars, but the Nat Geo documentary “Jane” has gotten on the board at the Emmys, winning Best Cinematography (Nonfiction). One of the winning cinematographers is Hugo van Lawick, Jane Goodall‘s ex-husband who shot the archival footage used in the film and died in 2002.

7:31pm — Yaaas queen! “RuPaul’s Drag Race” wins its first award of the night: Best Costumes (Variety/Nonfiction/Reality). It won that prize last year as well in addition to Best Picture Editing and Best Reality Host. So it’ll be interesting to see if it can increase its haul this year on the way to maybe challenging “The Voice” for Best Reality Competition Series.

7:37pm — “Jesus Christ Superstar” takes its first prize of the night: Best Lighting Design. The live production has 13 total nominations this year and its the overwhelming front-runner to win Best Variety Special (Live) at the end of the night.

7:38pm — Add another win to the “SNL” tally. Its victory for Best Production Design brings it to three wins for tonight, four wins for this year and 68 for all time — whew!

7:46pm — “Carpool Karaoke” wins Best Short Form Variety Series, which brings James Corden his third Emmy of the weekend and his seventh Emmy overall. It’s been a good few years for Corden since he came stateside to host “The Late Late Show.”

8:03pm — “Strong Island” pulled off an upset for Exceptional Merit in Documentary Filmmaking after losing the Oscar earlier this year. It defeated “Jane,” which had won for its cinematography and direction earlier in the evening. Meanwhile, “Zen Diaries of Garry Shandling” claimed Best Documentary/Nonfiction Special (congrats Judd Apatow!) and “Wild Wild Country” claimed Best Documentary/Nonfiction Series (congrats Sheela … I guess).

8:10pm — We had a new winner for Best Structured Reality, but Best Unstructured Reality Program was a repeat victory: “United Shades of America with W. Kamau Bell” prevailed for the second year in a row. The series has also won for its picture editing, and Bell is also up for Best Reality Host later tonight.

8:20pm — Bad news for Benj Pasek and Justin Paul: Best Music and Lyrics goes to “SNL” for “Come Back Barack,” sso Pasek and Paul’s EGOT hopes are dashed for now. This is good news, however, for Kenan Thompson, who is now an Emmy winner as a co-writer of the song.

8:22pm — David Attenborough wins Best Narrator for “Blue Planet II.” Anyone who has watched even a handful of nature series in their lives has likely heard his voice numerous times, so it’s a little hard to believe he has never won a Primetime Emmy for narration before. The 92-year-old British legend does, however, have a few News and Documentary Emmys in recent years.

8:24pm — Sorry, Bruno Mars. He was nominated for Best Music Direction for “24K Magic Live at the Apollo,” but Emmy voters went with “Tony Bennett: The Library of Congress Gershwin Prize for Popular Song.” But I suspect Mars is okay with the mere armful of Grammys he won earlier this year.

8:28pm — “Last Week Tonight” wins its third award of the night: Best Interactive Program. It also won in 2015 and 2017. And “Conan Without Borders” takes Creative Achievement in Interactive Media. Lately these digital and short form categories have just been dominated by digital versions of popular variety shows, hence the wins this weekend for James Corden, John Oliver, and now Conan O’Brien, though the win for O’Brien is gratifying as he hasn’t been as much of an Emmy staple as he used to be. Kudos!

8:40pm — I can’t imagine a more fitting win than “RuPaul’s Drag Race” claiming Best Hairstyling, but perhaps surprisingly this is the first time the show has won this award.

8:43pm — A win for Best Non-Prosthetic Makeup brings “SNL” to a whopping six victories this weekend. It’s one away from tying the Creative Arts haul of “Game of Thrones.”

8:44pm — And just like that, “SNL” wins Best Technical Direction, which brings its total to seven wins for the weekend. It has three more nominations at next week’s primetime telecast, so if it sweeps there, that will bring it to an all-time record total of 10 wins for the year.

8:53pm — “Anthony Bourdain: Parts Unknown” picks up its fifth and sixth prizes of the night: Best Sound Mixing and Best Sound Editing. That continues the show’s unprecedented sweep of its categories, so appreciation for the show following Bourdain’s tragic death earlier this year has expanded to include just about everyone involved in his show. Between that and “United Shades of America,” this has been an unusually good night for CNN as well.

9:00pm — “Dave Chappelle: Equanimity” wins Best Variety Special (Recorded) in a bit of an upset. It overtook two-time winner “Carpool Karaoke.” This is the second Emmy for Chappelle, who won his very first prize last year for guest-hosting “SNL.” We weren’t expecting that one either, so Chappelle has been having an unexpected Emmy renaissance.

9:12pm — It’s official: John Legend, Andrew Lloyd Webber and Tim Rice officially join the EGOT club as “Jesus Christ Superstar” wins Best Variety Special (Live). They are the 13th, 14th and 15th people who have won Emmy, Grammy, Oscar and Tony. And this awards was also a posthumous victory for producer Craig Zadan, who died suddenly in August. That brings the total for “Jesus Christ Superstar” to five wins for the night. It could win four more on September 17 since it’s up for three acting prizes, plus Best Movie/Mini Directing.