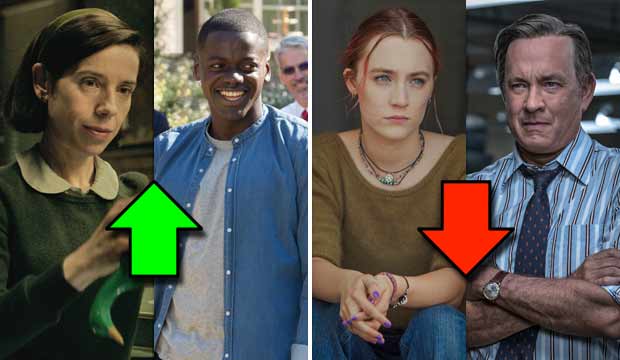 The 2018 Critics’ Choice Awards were held on Thursday night, January 11, and they had so many winners in common with the Golden Globes that they may as well have presented them at the same ceremony. But even though the Broadcast Film Critics Association that decided these winners has no membership in common with the Oscars, we can still get a sense of the season’s momentum from where they agreed with the Golden Globes, but also where they disagreed. So who’s up, who’s down, and who’s about the same after the Critics’ Choice Awards were handed out?

“The Shape of Water” — The film is driven by both its performances and its visuals, a combination that has led it to receive the most nominations at just about every event where it’s been eligible. Despite having a leading seven nominations at the Golden Globes it lost Best Film Drama to “Three Billboards Outside Ebbing, Missouri.” But this time its leading nominations total turned out to be insurmountable. With 14 bids “Shape of Water” had almost double the nominations of the next most recognized films, and though it didn’t dominate the awards it still came away with the most prizes: four, including Best Picture and Best Director (Guillermo Del Toro). Maybe there won’t be an Oscar split between Picture and Director after all. However, it’s important to note that Critics’ Choice has an uneven track record predicting the Best Picture winner. Only 13 of the 22 Critics’ Choice winners have matched Oscar (59%).

“Get Out” — The horror satire was shut out at the Golden Globes and drastically under-performed in the BAFTA nominations, so it was a shot in the arm when the film won two awards at Critics’ Choice. It actually beat the Best Picture winner, “Shape of Water,” for Best Sci-Fi/Horror Movie. And Jordan Peele prevailed for Best Original Screenplay in a close race against Greta Gerwig (“Lady Bird”) and Martin McDonagh (“Three Billboards”). It doesn’t hurt that the morning before Critics’ Choice Awards were handed out Peele also earned two nominations from the Directors Guild.

“I, Tonya” — The biographical film about figure skater Tonya Harding achieved two victories that were unexpected. Allison Janney won Best Supporting Actress; on one hand that makes sense because she just won the Golden Globe, but on the other hand Laurie Metcalf (“Lady Bird”) has dominated the critics’ prizes up to this point, so Critics’ Choice seemed almost like her home turf. It’s still too close to call, though, so that Oscar race might come down to who wins the SAG Award. Elsewhere, Margot Robbie won Best Actress in a Comedy. That was a surprise because Saoirse Ronan had just won the Golden Globe for Best Film Comedy/Musical Actress. “I, Tonya” has been exceeding expectations all season, and this continues that trend.

“Lady Bird” — Given its Best Film Comedy/Musical win at the Golden Globes and its success at previous critics’ events, it was a shock to see the film come away without a single award to show for its eight nominations. It even lost both of its comedy genre categories: Ronan lost Actress in a Comedy to Robbie, as mentioned above. But “Lady Bird” also lost Best Comedy Movie to “The Big Sick.” It seemed almost like Critics’ Choice voters went out of their way to avoid honoring the coming-of-age film.

“The Post” — Speaking of shut-outs, “The Post” tied “Lady Bird” with eight nominations and eight losses. But the implications may be more dire for “The Post.” In the time since the film racked up major nominations at the Globes and Critics’ Choice Awards in December, enthusiasm for the timely journalism drama seems to be wearing off. In addition to the shutouts at the Globes and Critics’ Choice Awards, it was also snubbed by the Directors Guild.

SEE2018 Critics’ Choice Awards: ‘The Shape of Water’ is the biggest winner with 4 awards including Best Picture

“Call Me by Your Name” — The romantic drama has been up and down all season, but even though Timothee Chalamet didn’t make any inroads in the Best Actor race — Gary Oldman (“Darkest Hour”) won, as he did at the Golden Globes — writer James Ivory stayed on track with a win for Best Adapted Screenplay.

“Three Billboards Outside Ebbing, Missouri” — It lost Best Picture and Best Original Screenplay after winning for both at the Golden Globes, but the film still had the second most wins for a film (three): Best Actress (Frances McDormand), Best Supporting Actor (Sam Rockwell), and Best Ensemble. Combined with the film’s strong performance at the BAFTAs and Directors Guild Awards, it hasn’t lost much of any ground.