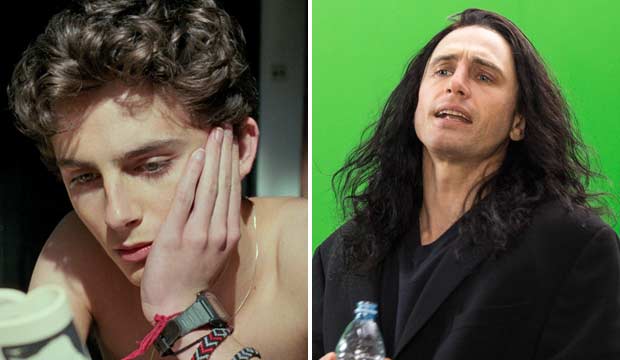 “Call Me by Your Name” has long been this season’s Oscar frontrunner for Best Adapted Screenplay, in part because its writer James Ivory is such an overdue industry legend and also because most other top Best Picture contenders this season happen to come from original scripts. So it’s no surprise that in the run-up to the Oscars Ivory is the overwhelming favorite to win Adapted Screenplay at the Critics’ Choice Awards on Thursday night, January 11.

As of this writing “Call Me by Your Name” is out front with leading odds of 1/2. Those odds are based on the combined predictions of more than 1,400 users who have made their picks at Gold Derby, including six Expert film journalists and seven Editors who cover awards year-round for Gold Derby. Our Editors are unanimous, with Chris Beachum, Joyce Eng, Marcus James Dixon, Rob Licuria, Matt Noble, Paul Sheehan, and myself all betting on “Call Me” to win. However, the Experts aren’t quite in lockstep.

Five out of six Experts agree with the consensus that “Call Me by Your Name” is the front-runner: Edward Douglas, Eng, Tariq Khan (Fox News), Peter Travers (Rolling Stone), and Adnan Virk (ESPN). However, Grae Drake (Rotten Tomatoes) is going out on a limb for “The Disaster Artist,” which was written by Scott Neustadter and Michael H. Weber. This is the second Critics’ Choice nomination for the writing duo, who previously contended for their original script for “(500) Days of Summer” (2009). Overall, “Disaster Artist” ranks second with odds of 9/2.

Do you agree with our odds that “Call Me by Your Name” will win? Can “The Disaster Artist” really upset? Or are we underestimating the remaining nominees “Molly’s Game,” “Mudbound,” and “Wonder”?