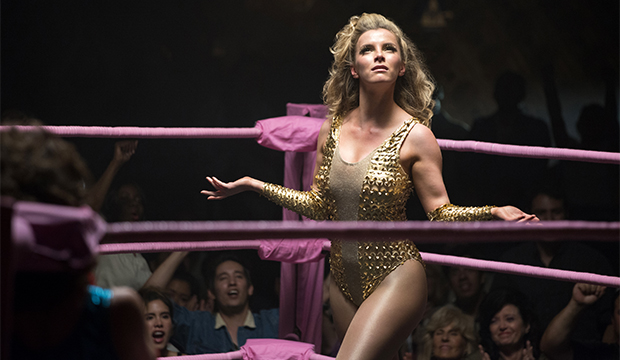 Betty Gilpin will be the (Liberty) Belle of the ball at Thursday’s Critics’ Choice Awards: The “GLOW” star is favored to win Best Comedy Supporting Actress, according to our latest predictions. Gilpin leads with 8/5 odds, ahead of Rita Moreno (“One Day at a Time”), who stands at 12/5 odds. Alex Borstein (“The Marvelous Mrs. Maisel”) follows at 5/2 odds, with a three-way tie for last between Jenifer Lewis (“Black-ish”), Mayim Bialik (“The Big Bang Theory”) and Alessandra Mastronardi (“Master of None”).

Last year’s champ, Jane Krakowski (“Unbreakable Kimmy Schmidt”) was not nominated and only Bialik has ever been nominated before, resulting in a win two years ago.

Gilpin earned raves for her breakout performance as Debbie Eagan, a washed-up former soap star who gets another shot at stardom in the wrestling ring as “Liberty Belle.” She is the top choice for two of our three participating Experts: Adnan Virk (ESPN) and I have her winning, while Peter Travers (Rolling Stone) is predicting Borstein.

Among Gold Derby Editors, Gilpin gets the vote of Marcus James Dixon, Paul Sheehan and Daniel Montgomery. Chris Beachum and Rob Licuria are forecasting a win for the legendary Moreno.

“GLOW” certainly has enough support for you to feel secure about a Gilpin victory – the Netflix series has four nominations, more than any other regular series, including Best Comedy Series and mentions for Alison Brie and Marc Maron. Borstein, Lewis and Bialik have their shows nominated too, while Mastronardi is only shortlisted alongside star Aziz Ansari and Moreno is the only nomination for her show.