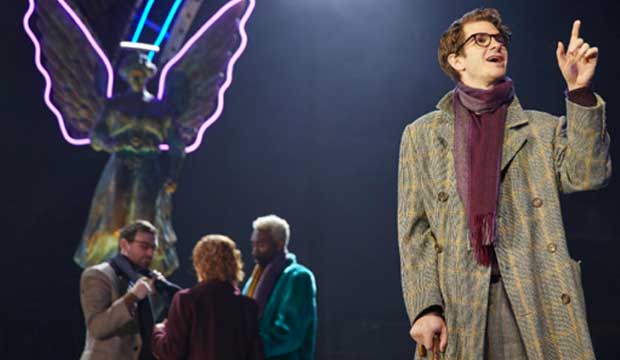 This Sunday’s Drama Desk Awards could well be a preview of next Sunday’s Tony Awards on the play side with almost all of the above-the-line awards going to our predicted front-runners for the Tonys including Best Play Revival to “Angels in America.” Three of the four acting awards on the play front went to performers in revivals on the rialto: leads Andrew Garfield (“Angels in America”) and Glenda Jackson (“Three Tall Women”) and featured player Nathan Lane (“Angels in America”). All of them are tipped to take home Tonys too. Jamie Brewer won the Featured Actress award for the off-Broadway production of “Amy and the Orphans.”

However, the Drama Desk nominating committee was not as enamored with the hit British import “Harry Potter and the Cursed Child.” Voters spurned the Tony frontrunner in the Best Play race here. That award went to the off-Broadway production “Admissions.” “Harry Potter” had to settle for wins for direction (John Tiffany) and in four below-the-line categories.

On the musical side, one of the leading Tony contenders, “The Band’s Visit,” was ineligible as it had contended here last year for its off-Broadway run. This exclusion cleared the way for another Tony contender, “SpongeBob SquarePants,” to claim Best Musical as well awards for both leading man Ethan Slater and scene-stealer Gavin Lee. The tuner also took the directing, set and sound design races.

And while “My Fair Lady” won bragging rights for Best Musical Revival, one of its rivals, “Carousel,” can boast of wins for leading lady Jessie Mueller and featured actress Lindsay Mendez as well as choreography and orchestrations.

Be sure to make your Tony predictions today so that Broadway insiders can see how their shows and performers are faring in our odds. You can keep changing your predictions as often as you like until just before nominees are announced on June 10. And join in the fun debate over the 2018 Tonys taking place right now with Hollywood insiders in our theater forums. Read more Gold Derby entertainment news.