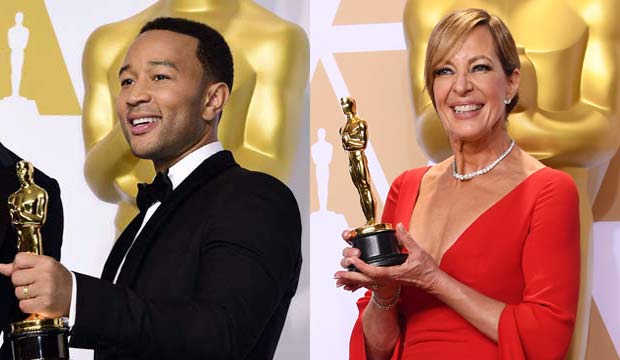 With more and more movie stars transitioning to television, the number of previous Oscar winners in contention at the Emmys continues to grow. Several Academy Award champs number among the 2018 Emmy nominees that were announced on Thursday, July 12.

One of the most recent Oscar victors in the Emmy lineup is Allison Janney, who won Best Supporting Actress earlier this year for playing an acid-tongued mother in “I, Tonya.” Now she contends for Best Comedy Actress for her small-screen role as another flawed matriarch in “Mom,” which has already brought her two Emmys in the supporting category (2014 and 2015). Janney is a perennial favorite of the TV academy, with 14 total nominations and 5 additional wins (4 for “The West Wing,” 1 for “Masters of Sex”).

Janney’s predecessor in the Oscar Supporting Actress category, Viola Davis (“Fences” in 2016), missed out on a Best Drama Actress nom for “How to Get Away with Murder” this year. But she nonetheless showed up in Best Drama Guest Actress for bringing her “HTGAWM” character Annalise Keating to “Scandal” for a Shondaland crossover. Davis previously made history at the Emmys when she won Best Drama Actress for the role in 2015: she was the first black actress ever to do so, and she was nominated again in 2016 and 2017.

John Legend is another first-time Emmy contender for “Jesus Christ Superstar,” both in Best Movie/Mini Actor and Best Variety Special (Live). He won an Oscar and a Grammy for his original song “Glory” from “Selma” (2014), as well as a Tony as a producer of “Jitney” (Best Revival of a Play in 2017). Should he win either of his Emmy bids, he’d join the elite group of just 12 entertainers who have completed the EGOT grand slam of show business awards.

SEE 2018 Emmy nominations: 50 most unforgivable snub include ‘Outlander,’ ‘Will & Grace,’ and ‘The Good Doctor’

Should “Jesus Christ Superstar” prevail for Variety Special, in fact, a whopping three people would suddenly achieve EGOT status, since the show’s composer Andrew Lloyd Webber and lyricist Tim Rice served as producers alongside Legend. The songwriting duo picked up an Oscar for the song “You Must Love Me” from “Evita” in 1996, while Rice snagged additional victories for “A Whole New World” from “Aladdin” (1992) and “Can You Feel the Love Tonight” from “The Lion King” (1994). Both are first-time Emmy nominees.

Morgan Freeman nabbed a Best Narrator nomination for “March of the Penguins 2: The Next Step.” An Oscar-winner for “Million Dollar Baby” (Best Supporting Actor in 2004), Freeman previously contended at the Emmys as a producer of “The Story of God” (Best Informational Program in 2016).

Oscar-winning director Barry Levinson (“Rain Man” in 1988) returns to the Emmy race for helming the TV movie “Paterno,” for which he also competes as a producer. Levinson has four Emmys on his mantel already: two for “The Carol Burnett Show” (Best Variety Writing in 1974 and 1975), one for “Displaced Person” (Best Children’s Program in 1985), and one for “Homicide: Life on the Street” (Best Drama Directing in 1993).

Ron Howard and Brian Grazer reaped their second consecutive nominations in the Best Limited Series category for their anthology series “Genius.” Howard and Grazer won the Oscar for Best Picture as producers of “A Beautiful Mind” (2001), for which Howard also took home Best Director. They reaped Emmys for producing both “From the Earth to the Moon” (Best Miniseries in 1998) and “Arrested Development” (Best Comedy Series in 2003). On his own, Grazer won Best Drama Series for “24” in 2006.

Best Actress Oscar-winner Cher (“Moonstruck” in 1987) is hoping to add a second Emmy on her shelf for producing the TV movie “Flint.” She previously won for the music special “Cher: The Farewell Tour” in 2003.

Steven Soderbergh is back in the Emmy race as an executive producer on the limited series “Godless.” The Oscar-winning filmmaker (“Traffic” in 2000) took home two Emmys for directing and editing the TV movie “Behind the Candelabra” (2013).

Oscar-winning screenwriter Eric Roth (“Forrest Gump” in 1994) returns to the Emmys for producing the limited series “The Alienist.” He has contended five consecutive times in Best Drama Series for “House of Cards” (2013-2017).

After winning Best Picture for “Spotlight” (2015), producer Steve Golin contends at the Emmys for “The Alienist.” He previously competed for “Mr. Robot” (2016) and “True Detective” (2014) in Best Drama Series.

In the documentary categories, Spike Jonze is nominated for Best Documentary Special as a producer of “Jim & Andy: The Great Beyond.” An Oscar-victor for “Her” (Best Original Screenplay in 2013), Jonze also earned back-to-back Emmy bids as a producer of the unstructured reality program “Gaycation” in 2016 and 2017.

Alex Gibney (“Taxi to the Dark Side” in 2007) contends for “City of Ghosts” in the Exceptional Merit in Documentary Filmmaking category. He already has five Emmys on his shelf: two for “Mea Maxima Culpa: Silence in the House of God” (2013), three for “Going Clear: Scientology & the Prison of Belief” (2015).