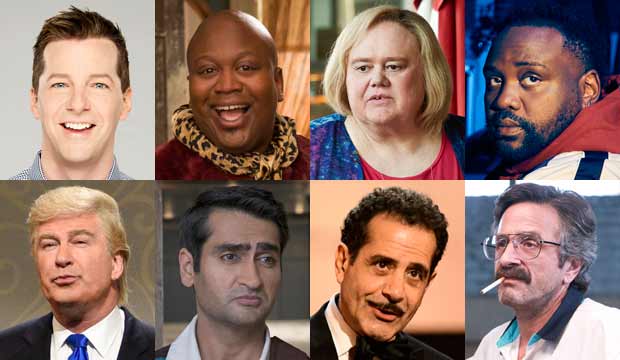 The Emmys usually love reruns, so it often pays to bet on repeat winners. But the problem with this year’s race for Best Comedy Supporting Actor is that there are three actors who have won this category before for their respective roles: Sean Hayes (“Will and Grace”), Louie Anderson (“Baskets”) and defending champ Alec Baldwin (“Saturday Night Live”). And those aren’t the only contenders who are keeping Emmy pundits up at night. We’ve polled 19 Expert journalists from top media outlets, and they’re split eight ways in picking the winner.

Hayes is the Experts’ top choice for resuming his role as Jack McFarland in the “Will and Grace” revival. Nine of them are predicting him to win: Debra Birnbaum (Variety), Debbie Day (Rotten Tomatoes), Eric Deggans (NPR), Lynn Elber (Associated Press), Lynette Rice (Entertainment Weekly), Robert Rorke (New York Post), Matt Roush (TV Guide Magazine), Ken Tucker (Yahoo) and Adnan Virk (ESPN). This would be the second win in this category for Hayes, a full 18 years after he won in 2000. The actor has one other Emmy win: Best Special Class Program in 2011 for hosting the Tonys.

Fellow scene-stealer Tituss Burgess (“Unbreakable Kimmy Schmidt”) is next in line according to our Experts, even though he has yet to win. Three of them say he’s the favorite: Joyce Eng (Gold Derby), Chris Harnick (E!) and Anne Thompson (IndieWire). Burgess has been nominated for the last three years in a row, but “Kimmy” hasn’t won an Emmy in any category thus far. However, he has won the most important award in showbiz: he’s a three-time Gold Derby Award champ.

Those are the only contenders who are currently backed by multiple Experts. But five other candidates are predicted by one Expert each.

Matthew Jacobs (Huffington Post) says Anderson will repeat for “Baskets” after previously winning for his role as Christine Baskets in 2016.

Sasha Stone (Awards Daily) is going out on a limb for Kumail Nanjiani (“Silicon Valley”), who has yet to be nominated for an Emmy. But he has a lot more visibility following his Oscar nomination for co-writing the semi-autobiographical comedy “The Big Sick.”

Peter Travers (Rolling Stone) thinks Tony Shalhoub (“The Marvelous Mrs. Maisel”) will surprise. He has three previous Emmy wins for Best Comedy Actor for “Monk” (2003, 2005-2006), and he’s still basking in the glow of his first Tony win in early June (Best Actor in a Musical for “The Band’s Visit”).

Ben Travers (IndieWire) gives the edge to Marc Maron (“GLOW“), who has yet to be nominated for an Emmy. However, Maron surprised us earlier this year by earning a SAG Award nomination for his performance.

And Glenn Whipp (LA Times) is forecasting a victory for Brian Tyree Henry (“Atlanta”). Henry was also eligible for the edgy FX comedy last year, but he was snubbed in this category. However, he did manage a Drama Guest Actor nom for his appearance on “This is Us,” and like Shalhoub he made an impact at the Tonys, where he was nominated for his featured role in the play “Lobby Hero.”

Who do you think is right? Or is there another contender they’re all underestimating?