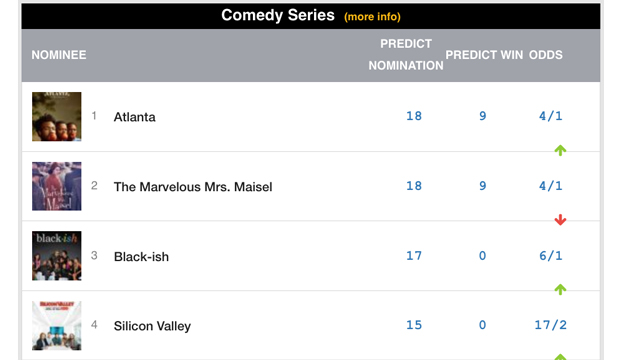 It’s a tie! At least, that’s how our Emmy Experts from major media outlets see the head-scratching 2018 race for Best Comedy Series. With three-time winner “Veep” sitting out this year the Experts are evenly split between FX’s “Atlanta” and Amazon’s “The Marvelous Mrs. Maisel” for the win, giving both comedies 4/1 racetrack odds. ABC’s “Black-ish” comes in third place with 6/1 odds, while HBO’s “Silicon Valley” is in fourth place at 17/2 odds.

SEEEmmys forecast: ‘Atlanta’ SHOULD get 5 acting nominations, but how many WILL it get?

No matter which comedy ends up winning, it’ll be historic for that show’s network. Neither FX or Amazon has ever won the race for Best Comedy Series, though they’ve both come close in recent years with “Louie” and “Transparent,” respectively. HBO has claimed this honor the past three years in a row thanks to “Veep” (2015-17), while ABC took home five consecutive trophies (2010-14) before that for “Modern Family,” which is still in the running this year.

Both shows took home pairs of Golden Globes for their first seasons: “Atlanta” for series and Glover in 2017, and “Mrs. Maisel” for series and Brosnahan in 2018. The Producers Guild Awards also honored both programs in 2017 and 2018, respectively. The Critics’ Choice Awards weren’t as predictable, as they chose “Silicon Valley” over “Atlanta” in 2017, then opted for “Mrs. Maisel” in 2018. Because of their different airing schedules, Season 2 of “Atlanta” now faces off against Season 1 of “Mrs. Maisel” at the 2018 Emmys. Which comedy will prevail?