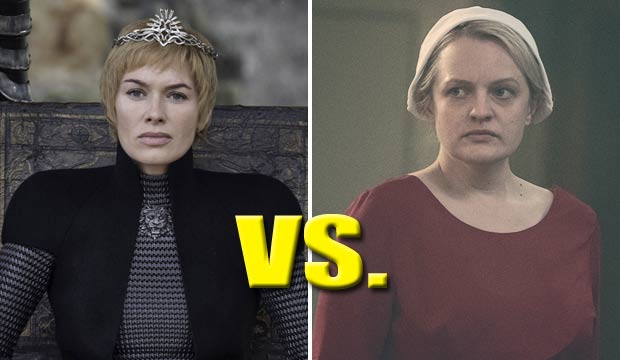 The Best Drama Series category at the 2018 Emmys marked the first head-to-head battle between 2017 champ “The Handmaid’s Tale” and 2015-16 winner “Game of Thrones,” which had been ineligible last year. Turns out Emmy voters much preferred fiery dragons to dystopian handmaids.

“Game of Thrones” is now tied at three wins apiece with  the 1950s anthology “Playhouse 90,” the 1960s legal drama “The Defenders” and the 1970s period piece “Upstairs, Downstairs.” It could equal the Emmy record of four wins next year as its final season is set to air in the spring. That would put “Game of Thrones” in the company of “Hill Street Blues,” “L.A. Law,” “Mad Men” and “The West Wing.”  The success of that latter series meant HBO’s last big drama, “The Sopranos,” only won this race twice (2004, 2007).

While this marked the first time that “The Handmaid’s Tale” and “Game of Thrones” faced off at the Emmys, both shows had competed earlier this year at various guild awards. The first season of “Handmaid’s” beat “GoT” almost every time. That success explains why “Handmaid’s” headed into the evening as the clear favorite to win.

“The Handmaid’s Tale” enjoyed leading 8/15 odds based on the support of 17 of our 27 Emmy Experts from major media outlets, eight of our nine staff Editors, 18 of our Top 24 Users and 19 of our All-Star Users. Conversely, “Game of Thrones” was in second place, albeit way back, with odds of only 11/2 odds based on the votes of just five Experts, 3 of the Top 24 and 2 All-Stars.

In third place with 8/1 odds was the final season of FX’s “The Americans.” While this spy thriller had only managed to win two Emmys in five years (both for guest actress Margo Martindale), five of our Experts thought the show would be given a farewell salute from voters in the form of a Best Drama Series triumph.

There was a two-way tie for fourth place on our charts with NBC’s family drama “This Is Us” and Netflix’s regal series “The Crown” both coming in at 50/1 odds. And then in the last two positions were Netflix’s ’80s sci-fi show “Stranger Things” (66/1 odds) and HBO’s robot western “Westworld” (80/1 odds).