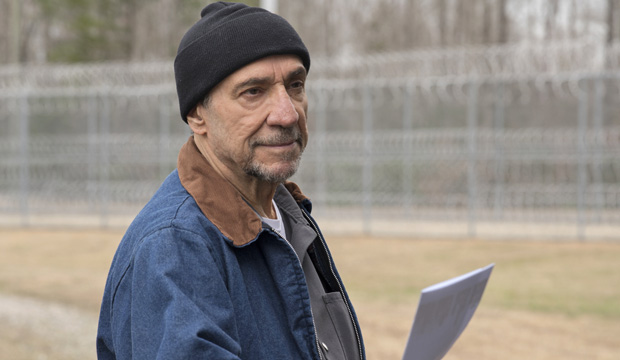 F. Murray Abraham has this year garnered his second Emmy nomination as Best Drama Guest Actor for portraying the shadowy CIA black ops specialist Dar Adal on Showtime’s “Homeland.” Abraham, who is also the recipient of an Oscar for his chilling turn as composer Antonio Salieri in “Amadeus” (1984), was previously nominated for “Homeland” in 2015, falling short to Reg E. Cathey (“House of Cards”).

During this season of “Homeland,” Abraham appeared in one episode, titled “All In.” The episode finds that Adal has been imprisoned over the last six months and is largely disconnected from the outside world’s explosive foreign and domestic affairs.

He is approached by U.S. Senator Sam Paley (Dylan Baker) about why Adal’s old friend Saul Berenson (Mandy Patinkin), now serving as national security advisor to the increasingly unpopular President Elizabeth Keane (Elizabeth Marvel), is overseas in Russia. Adal hasn’t a clue but suggests Paley seek out Russian experts, of which, according to Adal, there are very few.

Could “All In” secure Abraham an Emmy to go alongside his Oscar? Let’s delve into the pros and cons.

Abraham is an acclaimed veteran of the stage and screen, so respected among his peers that he managed to return to Best Drama Guest Actor – three years since his last appearance in the category – even as “Homeland” has otherwise largely disappeared at the Emmys. As Abraham has yet to emerge victorious for his work on the small screen, some voters may view him as due for a win.

Though his screen time is negligible in “All In,” Abraham has a commanding, almost daunting presence. He can perhaps look to Margo Martindale (“The Americans”) as an example of a fellow actor who earned Emmys for the briefest of guest spots.

While Abraham makes the most of his three minutes of screen time, he’s missing in action for the vast majority of “All In.” Worse, his appearance falls toward the beginning of the episode, leaving Adal all but forgotten by the end.

Hardly helping matters is “Homeland” having so significantly fallen off the map with the Emmys since the second season’s scoring of a series-high 11 nominations. The show has not won a single Emmy since that sophomore season in 2013.

There's no place like 'Homeland': Will Claire Danes and Mandy Patinkin return to the Emmys for the final…

F. Murray Abraham ('Mythic Quest') on his video gaming role: 'My closest connection was with pinball…