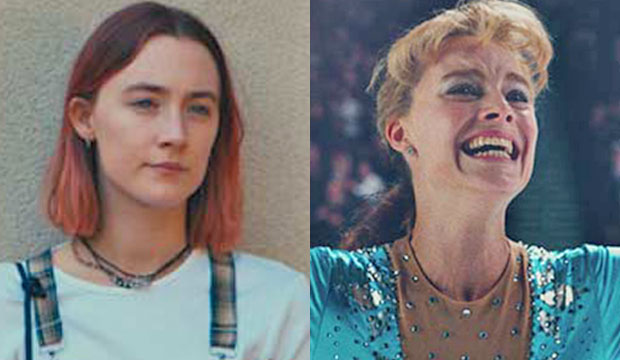 Saoirse Ronan (“Lady Bird”) has pulled ahead of Margot Robbie (“I, Tonya”) in the race for Best Film Comedy/Musical Actress at the Golden Globes on Sunday according to all four groups making predictions at Gold Derby. As of this writing, she now has the backing of nine of the dozen Expert film journalists we’ve polled for their predictions. Ronan also has the votes of six of our seven in-house Editors as well as 19 of our Top 24 Users who got the highest scores predicting last year’s Globe winners and 21 of our All-Star Top 24 who got the highest scores when you combine the last two years’ predictions.

When you combine the forecasts of all these users, Ronan has overwhelming odds of 1/2 to win for her touching performance as a troubled teen in Greta Gerwig‘s character study. Robbie, who also produced the film in which she portrays disgraced Olympian Tonya Harding, has three experts and one editor in her corner as well as five of the Top 24 and two All-Stars. That translates into odds of 4/1 to pull off an upset.

While Robbie is a first-time Golden Globes nominee, Ronan has contended twice before at these kudos bestowed by the Hollywood Foreign Press Assn. She first reaped a bid for her scene-stealing featured role in “Atonement” back in 2008 and was nominated two years ago over the drama side for her moving portrayal of an immigrant bride in “Brooklyn.”