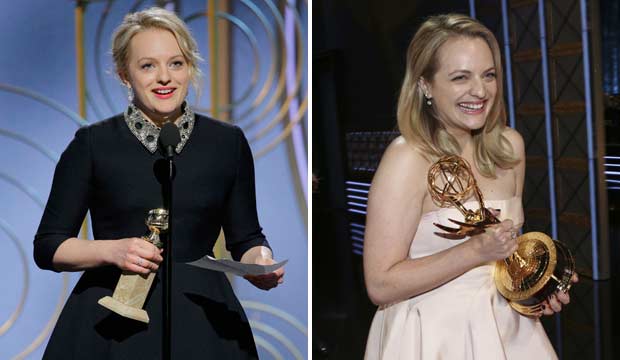 The most unpredictable thing about Sunday’s 2018 Golden Globe Awards was how predictable the winners were, at least in the television categories. The Hollywood Foreign Press Association gave out statuettes to seven of September’s Emmy winners — a surprising move for a group that prides itself on being trendsetters and the first to award a brand spankin’ new show.

The only reason the Globes didn’t match the other Emmy winners? They couldn’t. Donald Glover (“Atlanta”), whom the Globes awarded last year along with Best Comedy Series for his show, was not eligible (“Master of None’s” Aziz Ansari won Best Comedy/Musical Actor). Emmy comedy champs “Veep” and its star Julia Louis-Dreyfus were not nominated at the Globes, paving the way for the HFPA to anoint a freshman series and its lead from the Globes’ beloved Amazon: “The Marvelous Mrs. Maisel” and Rachel Brosnahan. Riz Ahmed (“The Night Of”), who won the Emmy for Best TV Movie/Limited Series Actor, competed at last year’s Globes, where he lost to Tom Hiddleston (“The Night Manager”); Ahmed’s Emmy rival Ewan McGregor (“Fargo”) won at Sunday’s ceremony (interestingly, “Fargo” has never won an acting Emmy but now has two acting Globes, for McGregor and Billy Bob Thornton).

This type of rubber-stamping across the board — where eligible — is unusual for the Globes, even when a program sweeps the way “Big Little Lies” did by going four-for-four. “Angels in America” (2003), which the Globes were able to award before the Emmys in 2004, went a record five-for-five, and “John Adams” (2008), which the Globes awarded after the Emmys in 2009, went four-for-four, but the HFPA still did its own thing when it came to the regular series categories.

In 2004, the Globes rewarded Anthony LaPaglia (“Without a Trace”), Frances Conroy (“Six Feet Under”) and Ricky Gervais (“The Office”), none of whom won Emmys for those series. The series prizes went to the British version of “The Office,” which was never up at the Emmys, and “24,” which wouldn’t win the Drama Series Emmy until 2006. In 2009, the Globes duplicated wins for “Mad Men”,”30 Rock” and its stars Alec Baldwin and Tina Fey, but deviated from the Emmys with victories for Gabriel Byrne (“In Treatment”) and Anna Paquin (“True Blood”), both of whom were on first-year shows at the time and neither of whom won Emmys for those shows.

Sunday’s winners were the predicted champs, according to our combined odds, so in that sense, they’re not surprising. But the Globes proved last year that they weren’t afraid to not join a bandwagon, when it gave phenom “The People vs. O.J. Simpson: American Crime Story” just two awards to “The Night Manager’s” three. However, a star-studded hit series like “Big Little Lies” — which includes two of the HFPA’s favorite actresses, Kidman and Dern, both of whom have four acting Globes now — proved to be too irresistible. Dern’s and Skarsgard’s wins are most impressive in the catch-all supporting category that often produces the biggest shockers.

In the case of “The Handmaid’s Tale” and Moss, not only is the series a new show, but it has a timely, vital message that the Globes could not ignore. It’s also from a network, Hulu, that the Globes had not yet awarded, and they love to cover as many bases as possible. This is an instance where the different eligibility calendars were a major factor. The Emmy eligibility period runs from June 1 through May 31 the following year, while the Globes use the calendar year. “The Handmaid’s Tale” premiered April 26, allowing the Emmys to recognize it first, which the HFPA may be a little peeved about. If it had premiered in the fall, right now we’d be wondering if the Emmys would follow suit or if this is one of those Globes wins that doesn’t translate into Emmy success, like “The Affair” or “Brooklyn Nine-Nine.”

Brown’s category was the closest to an upset, with many users picking Freddie Highmore (“The Good Doctor”) or dark horse Jason Bateman (“Ozark”) — two people from new shows vs. an older show, albeit by one year, like “This Is Us.” But perhaps voters felt guilty for overlooking Brown last year for his Emmy-winning breakthrough turn on “O.J.”, which then led to an Emmy win in September for “This Is Us.” Brown’s Globe win is also historic though: He’s the first black actor to win the category, and he’s the first to win from a broadcast series since Hugh Laurie (“House”) 11 years ago. It’s also NBC’s first victory in the category since Martin Sheen (“The West Wing”) won 16 years ago.

One of the best things about the Globes is their surprise winners, their wild and out-there picks — these people gave an award to Lady Gaga (“American Horror Story: Hotel”) two years ago after all — for shows and people the Emmys didn’t or would never recognize, so it is somewhat disappointing to see them play it safe this time around, no matter how deserving the winners are. Is this the start of a new trend or will they go back to their ol’ ways next year?

Be sure to check out how our experts rank Oscar contenders in this and the other top races. Use the drop-down menus at the top of each page to see the other categories. Then take a look at the most up-to-date odds before you make your Oscar nomination predictions. Don’t be afraid to jump in now since you can keep changing your predictions until just before nominees are announced on January 23.