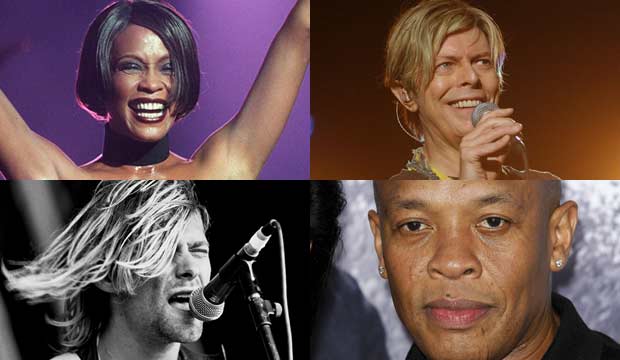 The Grammys recently announced their Lifetime Achievement Award winners for 2018, and now they’ve announced the recordings that are being inducted into the Hall of Fame. The 25 selections include albums and singles that are at least 25 years old. They were reviewed by a special committee of recording professionals and then finally approved by the recording academy’s National Board of Trustees. The Hall of Fame now comprises 1,063 recordings.

Among the youngest recordings to make the cut are Whitney Houston‘s classic ballad “I Will Always Love You” (1992), which won her the Grammy for Record of the Year in 1994. The groundbreaking 1991 grunge album “Nevermind” by Nirvana is also being inducted. That album earned a competitive bid for Best Alternative Album in 1992, but it didn’t win even though it’s now widely regarded as a classic. Another modern classic was “The Chronic,” the 1992 debut solo album from rap pioneer Dr. Dre which produced the Grammy winning song “Let Me Ride” and the Grammy nominated “Nuthin’ But a ‘G’ Thang.”

Recording academy president Neil Portnow said in a statement, “The Grammy Hall Of Fame strives to embody the changing climate of music throughout these past decades, always acknowledging the diversity of musical expression for which the Academy has become known. Iconic and inspiring, these recordings are an integral part of our musical, social, and cultural history, and we are proud to have added them to our growing catalog.”

Check out the complete list of inducted songs and albums below, which also includes hits by David Bowie, The Rolling Stones, Johnny Cash, Jimi Hendrix, and more.

“I WILL ALWAYS LOVE YOU”
Whitney Houston
Arista (1992)
Single