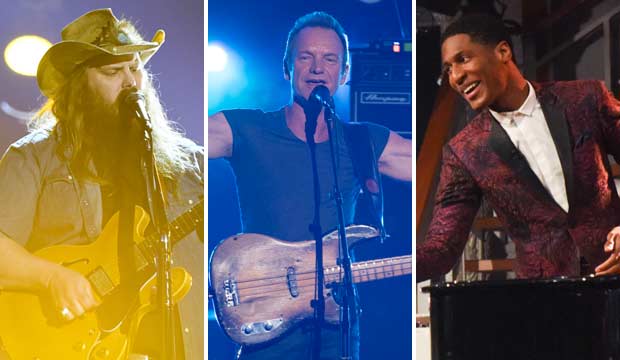 The 2018 Grammy Awards are just days away, but there are still more performers being added to the lineup for the telecast. Jon Batiste, Gary Clark Jr., Emmylou Harris, Zuleyka Rivera, Chris Stapleton and Sting will take the stage when the recording academy hands out its 60th annual prizes on Sunday night, January 28.

Harris is receiving a Lifetime Achievement Award from the Grammys this year, which she’ll add to the 13 competitive prizes she has won over the course of her career. She’ll be performing alongside Stapleton, who won his first two Grammys two years ago and is up for three more this year: Best Country Album (“From A Room: Volume 1”), Best Country Solo Performance (“Either Way”), and Best Country Song (“Broken Halos”).

Additional Lifetime Achievement winners this year include Chuck Berry and Fats Domino, who both died in 2017. Batiste and Clark will be paying tribute to them with their onstage collaboration. Clark previously won a Grammy in 2014 for Best Traditional R&B Performance (“Please Come Home”), and Batiste is a singer and multi-instrumentalist currently known as the bandleader for “The Late Show with Stephen Colbert.”

Rivera is a Puerto Rican singer, dancer and actress — and 2006’s Miss Universe. She’ll be performing alongside Grammy contenders Luis Fonsi and Daddy Yankee, who are up for Record of the Year and Song of the Year for their crossover Latin hit “Despacito.”