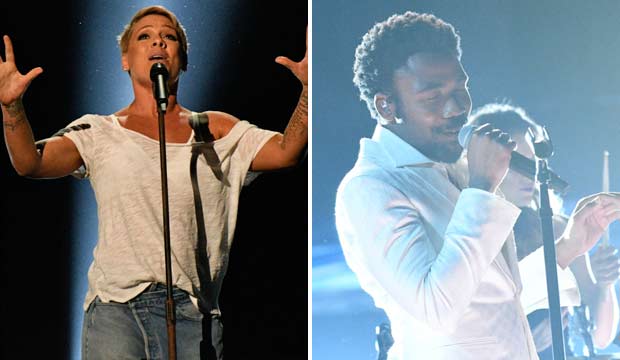 Our forum posters are notorious in the showbiz world for their incredibly blunt honesty and surprising insights. The performances at the 60th Annual Grammy Awards brought that fighting spirit out yet again. Reactions spanned from Childish Gambino making “someone pregnant with that performance” to Ben Platt singing “his ass off” performing “Somewhere” from “West Side Story.”

Take a look below for some of the best praise and shade from our forums. Read more and have your say here. And make sure to check out the complete list of winners in over 80 categories.

BamaEd: Kendrick Lamar started the show by scaring the old white folks thinking “60 Minutes” was on. He didn’t need Dave Chappelle or Bono and The Edge. He was powerful enough.

neverkneel: Kendrick is killing it!

M: LOL at Gaga, halfway through her performance be like “Bitches thought I wasn’t gonna sing ‘Million Reasons’ yet again?”

Xtina: Honey, Little Big Town bored me. They really act as if Taylor Swift is some amazing songwriter, as evidenced by them announcing she wrote that crap.

Gary Clark Jr. and Jon Batiste: “Ain’t That a Shame” and “Maybellene”

SEEGrammys 2018: Did you love or hate James Corden as host for the 2nd year in a row? [POLL]

Oscar Rodriguez: “Despacito” has been the best performance by a mile.

Atypical: Would have liked to hear “Redbone” instead of this song.

BamaEd: I think Donald Glover made someone pregnant with that performance. Selfish me would have loved a Danny Pudi cameo at the end though. Troy and Abed in the morning!

Xtina: Honey, I bet Pink will be in the air again. *Vomits*

cnmem10: Pink slayed and only in jeans. No big production; didn’t need 50 dancers. Talent there.

SEEGrammys 2018: The top 6 most shocking upsets include Bruno Mars, The Weeknd, Lin-Manuel Miranda …

Bruno Mars and Cardi B: “Finesse”

BamaEd: WooHoo!! That was so much fun. Go Bruno and Cardi B!

Sting and Shaggy: “Englishman in New York” and “Don’t Make Me Wait”

M: Sting bragging about his legal status feels a bit awkward in the current political atmosphere.

KaRol: Khaled’s presence on this stage was laughable.

Jays: Rihanna looked gorgeous, and that performance was everything. Can’t wait for her next era.

SEEGrammys 2018: Jay-Z suffers one of the worst shutouts of all time with 8 nominations and 8 losses

James Otto Sweet Heart: Whose idea was it that Eric Church, Brothers Osborne, and Maren Morris sing a song that isn’t country? If that was the only way that they could get the performance slot, I would have told the Grammy Award show powers-that-be to bite me!

BenitoDelicias: The “Tears in Heaven” performance was a mess.

Dynasty86: Kesha’s holding back tears…love all those ladies standing up there with her.

Jays: I sooo wanted to like that performance. The idea was there but the vocals were so off that it was distracting. Still love the song and thought she deserved to win tonight.

BamaEd: Miley’s voice is fine enough I guess, but her performance … looks like she’s ready to crawl on that piano and start humping it. That just seems off.

Ben Platt and Patti LuPone: “Somewhere” and “Don’t Cry For Me Argentina”

Oscar Rodriguez: Ben Platt is teaching these little singers HOW. TO. SING.

JGibson: What a messy in memoriam! Who edited that????

Oscar Rodriguez: Alessia’s vocals are on point but the “1-800” VMA performance was better.

GusCruz: The tastelessness of placing this performance after remembering a man who committed suicide in order to have a “message” is appalling. Shameful.