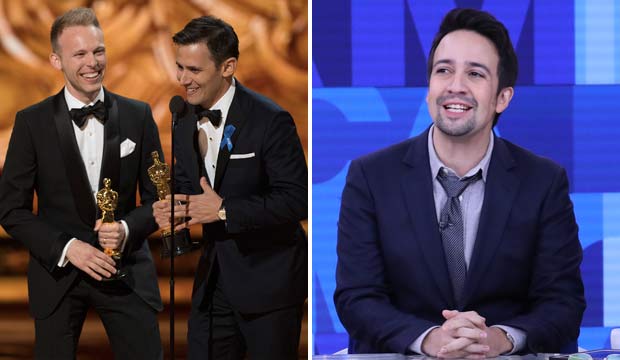 “City of Stars” from “La La Land” won the Oscar for Best Original Song in 2017, so it makes sense that it’s now the Grammy front-runner for Best Visual Media Song. It leads our predictions with 2/7 odds, but can songwriters Benj Pasek, Justin Paul, and Justin Hurwitz get the better of Lin-Manuel Miranda (“How Far I’ll Go” from “Moana”) at these awards where Miranda is already a two-time winner?

Our official racetrack odds are based on the combined predictions of more than 1,900 users who have entered their picks here at Gold Derby. That includes seven Expert journalists from top media outlets, six of whom think “City of Stars” will win: Glenn Gamboa (Newsday), Edna Gundersen (Gold Derby), Tom O’Neil (Gold Derby), Peter Travers (Rolling Stone), Adnan Virk (ESPN), and Chris Willman (Variety). In addition, “City of Stars” is backed unanimously by the six Editors who cover awards year-round for Gold Derby: Chris Beachum, Marcus James Dixon, Rob Licuria, O’Neil, Paul Sheehan, and myself. Also agreeing with that consensus are 13 of our Top 24 Users who got the highest scores predicting last year’s Grammys and 18 of our All-Star Top 24 who got the highest scores when you combine the last two years’ predictions.

But while there is a lot of overlap between the Oscars and Grammys in this category, there have also been some marked disagreements. It’s hard to make direct comparisons since the Grammy and Oscar eligibility years don’t line up perfectly, but in the last 10 years only five of the Grammy winners in this category have also won Oscar. And Hurwitz, Pasek, and Paul all have other chances to win Grammys this year. Hurwitz is also nominated for the “La La Land” score, compilation album, and arrangement, while Pasek and Paul also contend for their “Dear Evan Hansen” musical theater album. So voters may feel free to check off their names elsewhere and reserve this category for another artist.

That could be good news for Miranda, who ranks second in our predictions with 6/1 odds. One of our Experts, Lyndsey Parker (Yahoo Music), thinks he’ll win for “How Far I’ll Go,” as do four of our Top 24 Users and two of our all-stars. Miranda’s two previous victories were both for Best Musical Theater Album (“In the Heights” in 2009, “Hamilton” in 2016).

“La La Land” and “Moana” also face off in the race for Best Visual Media Compilation, which awards soundtrack albums. And again “La La Land” has the advantage with 1/4 odds and support from five of our Experts, all five Editors, 15 of our Top 24 Users, and 20 All-Stars. Ranked second in that category is actually the music-driven action comedy “Baby Driver” with 7/1 odds.