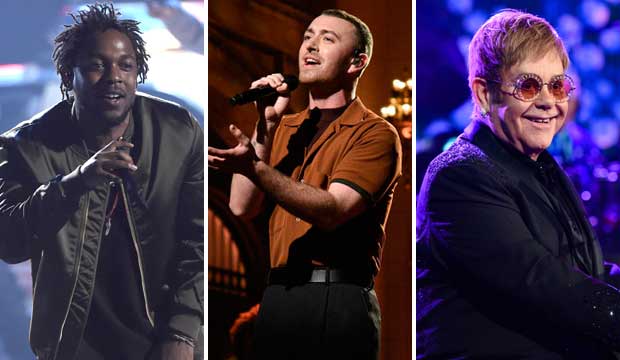 The Grammys hand out most of their 84 awards during a non-televised event so that Sunday’s main show on CBS can be filled with performances. Tune in starting at at 4:30 p.m. PT/7:30 p.m. ET on Jan. 28 to see music’s biggest stars take to the stage at New York’s Madison Square Garden to celebrate the 60th anniversary of the Grammy Awards.

Kendrick Lamar, who we are predicting will win a whopping six Grammys, is set to kick off the show by teaming up with U2 on “American Soul.” Bruno Mars, who should take home three awards, is doing a duet with Cardi B on “Finesse.” And Luis Fonsi and Daddy Yankee will sing their chart-topping hit “Despacito” with a little help from Zuleyka Rivera.

Expect many emotional musical moments throughout the three-and-a-half hour telecast. Country superstars Maren Morris, Erich Church and the Brothers Osborne will remember the victims of the Las Vegas concert shooting. Logic, Khalid and Alessia Cara will sing the suicide prevention song “1-800-273-8255.” Jon Batiste and Gary Clark Jr. are teaming up to pay tribute to the late Chuck Berry and Fats Domino. And five women will raise their voice in song on “Praying”: Camila Cabello, Andra Day, Kesha, Cyndi Lauper and Julia Michaels.

Among the artists getting together for once in a lifetime duets are: Elton John and Miley Cyrus; Emmylou Harris and Chris Stapleton ; and Tony winners Ben Platt and Patti Lupone. And there will be a one-off trio as Rihanna joins with DJ Khaled and Bryson Tiller on “Wild Thoughts.”

No, you didn’t miss Lorde‘s name on the list of performers. Despite being the only woman in contention for Album of the Year (with her bid for “Melodrama”), she won’t be singing on the show.

Follow us on Twitter @goldderby for all the latest results. Dish the Grammy Awards live in our famous forums where more than 5,000 Hollywood insiders (including loads of past Grammy winners and nominees) post savage comments while hiding behind user names. Add your voice to the conversation and tell us what were the best (and worst) moments of the night? Did you think that the right artists, albums and songs won? Who delivered the best speeches and performances?

Make your Grammy predictions so that Hollywood record executives and top name stars can see how their songs and albums are faring in our Grammy odds. Read more Gold Derby entertainment news.