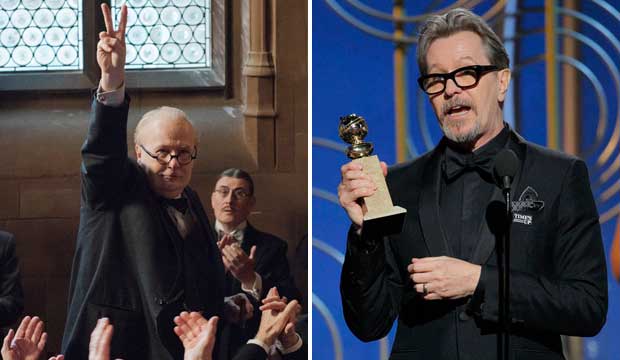 Gary Oldman (” “Darkest Hour”) solidified his lead in the Oscar race for Best Actor with his win at the Golden Globes on Sunday. As of this writing, the veteran actor has the backing of a whopping 25 of our 29 Oscar experts who are drawn from major media for his portrayal of Winston Churchill. His closest challenger is newcomer Timothee Chalamet who is racking up critics awards for his performance in “Call Me By Your Name.” (See the individual rankings of the Oscar experts.)

The New York and Los Angeles film critics as well as those in Atlanta, Chicago, Florida, Kansas City, and Phoenix were won over by Chalamet’s sensitive portrayal of a precocious teenager who falls in love with a man seven years his senior in Luca Guadagnino‘s film. It is one of the best-reviewed of the year and is a strong Oscar contender across-the board.

We had thought that Oldman’s strongest competition would be Daniel Day-Lewis who has announced that his upcoming film, “Phantom Thread,” will be his final one. This marks his second collaboration with writer/director Paul Thomas Anderson. Their first, “There Will Be Blood,” won Day-Lewis the second of his record three Best Actor Oscars in 2008. Before the NYFCC awards, Day-Lewis was the second choice of 16 of our Oscar experts for this period picture, in which he plays a 1950s royal couturier; that is down to just five as of this writing.