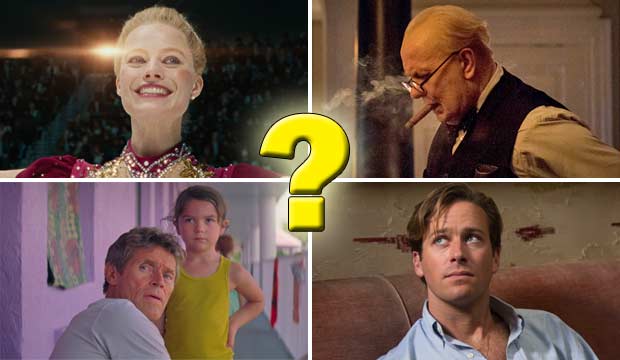 With Oscar nominations set to be announced on Tuesday morning, January 23, our forum posters are scrambling to update their predictions, especially after an eventful weekend that gave us winners at the Producers Guild and Screen Actors Guild Awards. But while narrowing down some of the top winners might be a little easier after PGA and SAG, there are still some big question marks when forecasting the complete list of nominees.

For instance, how many nominees for Best Picture will there be? In 2010 and 2011 the academy guaranteed 10 nominees in the top race, but in 2012 they instituted a sliding scale of anywhere between five and 10 nominees. Since then there have always been either eight or nine contenders in the category, so whether some films on the bubble make the cut largely depends on how the numbers add up. The producers of close-call contenders like “The Florida Project,” “The Big Sick,” “I, Tonya,” and “Darkest Hour” will surely have their fingers crossed.

Then there’s confusion surrounding some of the contenders in other major races. Can “Call Me by Your Name” filmmaker Luca Guadagnino still get into Best Director, or will we see all five Directors Guild nominees be cited by the motion picture academy? Will “Call Me” co-stars Armie Hammer and Michael Stuhlbarg rebound in the Best Supporting Actor race after snubs at the SAG Awards and BAFTAs? And what unlucky films will be left out of an unimaginably crowded category like Best Original Screenplay?

Read some of our forum posters’ comments below, and join the discussion here to commiserate about the uncertain state of the race.

TheRedBoy: “There are so many things I’m still quite unsure of. There are several films I can imagine pulling ‘shock’ nominations [for Best Picture].”

Teridax: “I think if there are seven nominees ‘I, Tonya’ will make the cut for BP, if there are eight BAFTA BP nominee ‘Darkest Hour’ makes it, and if there are nine then PGA/ACE Eddie nominee ‘The Post’ just barely makes it with Streep being the only other nomination as an ‘Extremely Loud and Incredibly Close’ type of outcome.”

Palmboom: “On the eve of the nominations, I’m still having a lot of doubts. I don’t think I can remember the last year that I had this much trouble on the last day of predicting. Very exciting, but also very much keeping me up at night!”

nevkm: “According to the latest updates experts are leaving out ‘I, Tonya.’ This is getting more and more confusing.”

aahoto: “Fretting over Supporting Actor and Original Screenplay. Does ‘I, Tonya’ get in after WGA and BAFTA nominations? Or does ‘The Big Sick’ get in? Last two spots in Supporting Actor are a mess: Hammer/Stuhlbarg/Plummer/Harrelson? Argh!”