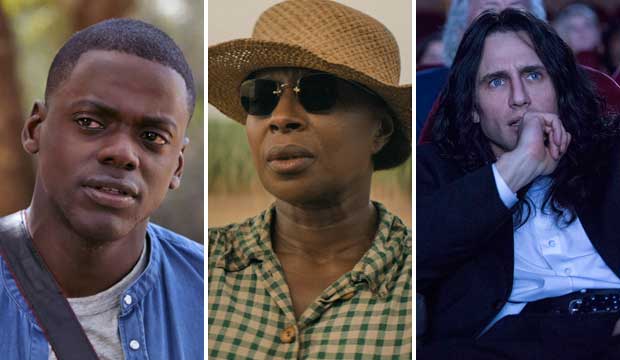 As I’m writing this the 2018 Oscar nominations are less than 24 hours away, which means it’s time for all of us to make those last-minute, panicked changes to our predictions that we’ll wake up to regret in the morning. I’m not sure if I’ll actually make any profound changes beyond, say, moving a Best Picture contender from number-nine to number-eight on my list. I try to follow the math more than my gut, and none of this weekend’s Producers Guild or Screen Actors Guild results changed many of those calculations for me, at least not in terms of who will be nominated. But there are some mysteries I’m still losing sleep over. Here are the top five:

1. Will the academy really embrace “Get Out”? All signs point to yes. It earned a nomination for its ensemble at the SAG Awards. And it picked up additional top nominations at the Producers Guild, Directors Guild, Writers Guild, Golden Globes, and Critics’ Choice Awards. It won Best Picture from regional critics groups from Atlanta to Oklahoma. But it’s still an unusual horror-comedy-thriller-satire-social-commentary hybrid that would be unlike anything the Oscars have celebrated before. It resonates every bit as strongly about the experience of being black in America as “12 Years a Slave” (2013) and “Moonlight” (2016) did, but the cynic in me still wonders if it will really resonate with many of the older white voters who still make up a large portion of the motion picture academy. I’m currently predicting bids for Best Picture, Best Director (Jordan Peele), Best Actor (Daniel Kaluuya), Best Original Screenplay, and Best Film Editing, but will voters get “Get Out”?

2. Will Netflix help or hurt “Mudbound”? This film blew me away when I saw it last fall at the New York Film Festival. And on paper it has Oscars written all over it. It’s a historical drama about an important period of American history (World War II and the Jim Crow era), and its co-writer/director Dee Rees is due for recognition after establishing herself with acclaimed, award-winning projects like “Pariah” and “Bessie.” But is the Netflix factor still too big to overcome? For every voter who sees expanded creative opportunities online, there might be more who resent the streaming service for disrupting the traditional film distribution model, and other purists who feel films should be shown on the big screen and not on a TV, computer, or smartphone. I’m currently predicting noms for Best Supporting Actress (Mary J. Blige), Best Adapted Screenplay, Best Cinematography, and Best Song (“Mighty River”), but I don’t think it’s guaranteed in any of those races.

3. Will “Darkest Hour” sweep the nominations or fall by the wayside? There is a lot of uncertainty surrounding many of this year’s contenders, but “Darkest Hour” is unique in that it’s on the bubble in so many categories that it could conceivably sweep the nominations or get just the one bid for lead actor Gary Oldman. We’ve gotten mixed signals from the precursors: just one nom from the Golden Globes and SAG Awards, four from the Critics’ Choice Awards, but then a whopping nine from the BAFTAs. As it stands I’m splitting the difference, betting on it in five categories: Best Picture, Best Actor (Oldman), Best Cinematography, Best Production Design, and Best Makeup and Hairstyling.

4. Has “The Post” lost all of its mojo? It’s a remarkably timely film about journalistic integrity directed by three-time Oscar winner Steven Spielberg and starring three-time Oscar winner Meryl Streep and two-time Oscar winner Tom Hanks. That’s as big a dream team as you could ask for, and the early enthusiasm for it was strong with six Golden Globe noms and eight Critics’ Choice noms. But that enthusiasm seems to have worn off. It lost all of its Globe and Critics’ Choice nominations, and it was completely missing in action at the SAG Awards and BAFTAs, perhaps because it wasn’t available in time for voters to see it. I’m currently predicting just three nominations: Best Picture, Best Actress (Streep), and Best Score. Perhaps I’m underestimating it, but I wonder if I might even be overestimating it at this point.

5. Will “Time’s Up” catch up with James Franco? The awards season has been heavily influenced by the #MeToo movement that exposed sexual harassment and assault allegations against everyone from Harvey Weinstein to Kevin Spacey to Louis C.K. That further complicated the awards season when James Franco, a current Best Actor contender for “The Disaster Artist,” was accused of misconduct by five women. But here’s the thing: the LA Times published the accusations on January 11, one day before the close of Oscar voting for nominations. Chances are a lot of ballots — perhaps most of them — were submitted already by the time the controversy reached its peak. But perhaps a large number of academy members waited until the last minute to vote so they could see as many films as possible, in which case he could lose just enough support to cost him a bid. As it stands I’m still predicting him to be nominated, but that might make for an awkward Oscar season going forward.