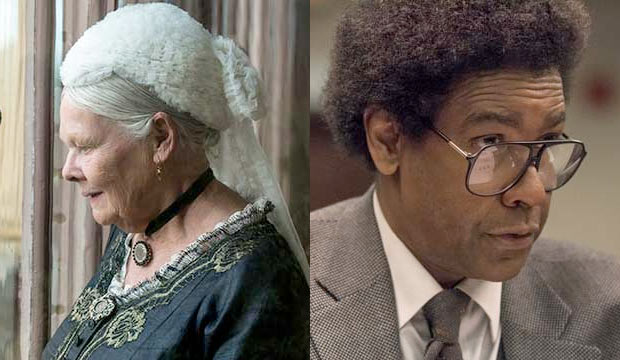 With only days to go before the 2018 Oscar nominations are announced on January 23, I’ll readily admit that the four acting races are keeping me up at night. For the most part Gold Derby’s Oscar predictions line up with the SAG Awards nominations. However, four performers in particular — Judi Dench (“Victoria & Abdul”), Denzel Washington (“Roman J. Israel, Esq.”), Hong Chau (“Downsizing”) and Woody Harrelson (“Three Billboards Outside Ebbing, Missouri”) — are not predicted to follow up their SAG notices with Oscar bids. But all hope is not lost. Any of these on-the-bubble contenders can still defy the odds on Oscar nominations morning, and here’s how:

Best Actress — Gold Derby predicts that four SAG nominees will show up at the Oscars: Frances McDormand (“Three Billboards Outside Ebbing, Missouri”), Saoirse Ronan (“Lady Bird”), Sally Hawkins (“The Shape of Water”) and Margot Robbie (“I, Tonya”). Judi Dench is that fifth SAG nominee, but she’s forecasted to be replaced by Meryl Streep (“The Post”). The prevailing theory is that SAG voters didn’t see “The Post” in time because it was a late release, which explains Streep’s snub there. However, isn’t it possible that they just loved Dench’s performance more? In “Victoria & Abdul” Dench returns to the role of Queen Victoria, for which she was previously nominated for “Mrs Brown” (1997). With seven career Oscar nominations to her name, and one victory for “Shakespeare in Love” (1998), it’s probably not a smart idea to discount her chances this time around.

Best Actor — This is another Oscar race that we expect will match four-for-five with SAG. Gary Oldman (“Darkest Hour”), Timothee Chalamet (“Call Me By Your Name”), Daniel Kaluuya (“Get Out”) and James Franco (“The Disaster Artist”) will be in, while SAG contender Denzel Washington will be replaced by Daniel Day-Lewis (“Phantom Thread”). Day-Lewis’ exclusion from the SAG Awards is mystifying, unless those voters simply didn’t have time to watch “Phantom Thread” before turning in their ballots. But Washington ticks all of the right Oscar boxes in “Roman J. Israel, Esq.”: He plays a real-life person, he has grand-standing scenes, and he’s a former two-time winner who many thought should have won last year for “Fences.”

Best Supporting Actress — Hong Chau earned her first career SAG nomination for “Downsizing,” but she’s on the fence to repeat at the Oscars. Instead, we predict that the five nominees will be Allison Janney (“I, Tonya”), Laurie Metcalf (“Lady Bird”), Mary J. Blige (“Mudbound”), Holly Hunter (“The Big Sick”) and Octavia Spencer (“The Shape of Water”). Spencer is the only one who didn’t make the SAG lineup, though she was recognized at the Golden Globes, BAFTA and Critics’ Choice Awards, so perhaps her SAG exclusion was simply a blip. Chau was undoubtedly the best thing about “Downsizing” and stole every seen she was in, which makes her a force to be reckoned with at the Oscars.

Best Supporting Actor — Unlike the other acting races, Gold Derby projects that only three of these contenders will match up between SAG and the Oscars: Sam Rockwell (“Three Billboards Outside Ebbing, Missouri”), Willem Dafoe (“The Florida Project”) and Richard Jenkins (“The Shape of Water”). As for the other two SAG nominees, Steve Carell (“Battle of the Sexes”) is campaigning up in Best Actor at the Oscars, while Woody Harrelson is expected to be replaced by either Armie Hammer (“Call Me By Your Name”) or Christopher Plummer (“All the Money in the World”). However, if Oscar voters love “Three Billboards” as much as other awards groups have, it’s likely that Harrelson and Rockwell will both be nominated.