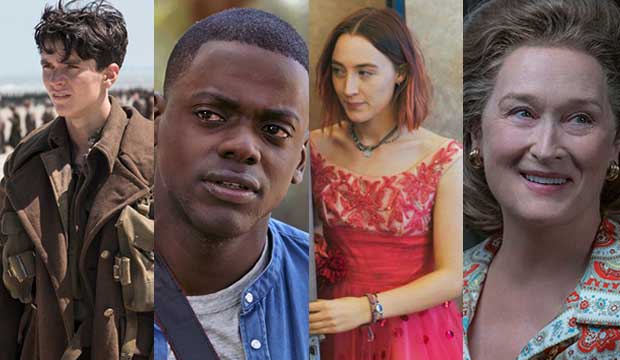 With the Golden Globe Awards just hours away, our 29 Oscar experts from major media outlets are hoping to get guidance from these precursor awards as to what will win Best Picture at the Academy Awards. Their votes are split between seven films, with four of them far out front of the other three.

Jordan Peele‘s social satire “Get Out” gets the votes of a leading eight of our pundits. However, the rest of them are ranking it low enough on their lists that it sits only in second on our Best Picture chart, with odds of 17/2 to win the top Academy Award. (See the individual rankings by experts and the resulting odds.)

Tied for first with leading odds of 7/1 are three films: “Dunkirk,” “Lady Bird” and “The Post.” Christopher Nolan‘s WWII epic “Dunkirk” is the longtime frontrunner and has seven experts in its corner; however, that is down from an even dozen at the start of last month. Greta Gerwig‘s coming-of-age charmer “Lady Bird” and Steven Spielberg‘s docudrama “The Post” each have the votes of five experts. But with the rest of our prognosticators ranking them highly enough, their overall support is equal to that of “Dunkirk.”

Our other four experts are split among three films. Two experts are taken with Guillermo del Toro‘s fantasy “The Shape of Water”; one is enamored with Luca Guadagnino‘s romance “Call Me By Your Name,” which was the big winner at LAFCA; and another likes the look of Martin McDonagh‘s character study “Three Billboards Outside Ebbing, Missouri.”

7. “Call Me By Your Name”: One expert (9/1 odds)
Jeffrey Wells (Hollywood-Elsewhere)