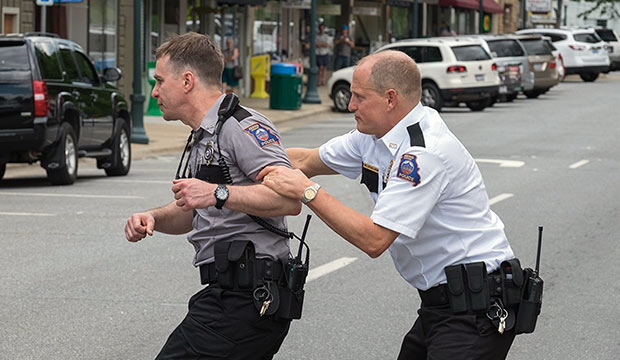 We ask this question every year: Will the Oscars finally double-nominate a film for Best Supporting Actor again? It last happened 26 years ago, with Harvey Keitel and Ben Kingsley for “Bugsy.”

“Call Me by Your Name” was pegged early as the most likely film to reap bids for two featured fellows this year. On Aug. 14, the day after the Gold Derby predictions center opened, Michael Stuhlbarg and Armie Hammer were ranked among the category’s top three contenders, after Willem Dafoe from “The Florida Project.” The Critics’ Choice Awards validated the pairing by nominating both, but then they started being snubbed altogether. Stuhlbarg fell out of the top five on Jan. 12; Hammer currently ranks fourth, but is trending down and has already fallen to sixth in the aggregate predictions of Gold Derby’s Editors, Top 24 Users and All-Star Users.

While BAFTA and the Screen Actors Guild snubbed the “Call Me by Your Name” performances, they nominated both Woody Harrelson and Sam Rockwell for “Three Billboards Outside Ebbing, Missouri.” Gold Derby’s top users are now predicting the Oscars will follow suit. It bodes well that the two major awards for which Harrelson has been nominated are voted on by people who work in the industry and are variably Oscar voters themselves, as opposed to journalists, like at Critics’ Choice and Golden Globe Awards.

What makes the Oscars a unique challenge is its instant runoff balloting process. Unlike with the Critics, Globes, BAFTA and SAG, Oscar voters rank their votes for the Best Supporting Actor nominations. First-place votes are counted first and second-place votes might not be counted at all, which hurts Harrelson, the consensus second choice from his film. Rockwell won with the Critics and Globes; neither group even nominated Harrelson.

The AACTA International Awards — the Australian equivalent of BAFTA, which numbers Oscar voters among its membership — awarded “Three Billboards Outside Ebbing, Missouri” Best Picture and Rockwell Best Supporting Actor, but did not nominate Harrelson, perhaps because they use preferential balloting.

SEE Will all four acting winners pull off an unprecedented sweep?

A similar situation had played out two years before. “Crash” would go on to win Best Picture and with SAG; supporting actors Don Cheadle and Matt Dillon were nominated together at BAFTA and SAG, but only Dillon got an Oscar nomination. (These case studies bode well for “Three Billboards Outside Ebbing, Missouri” in Best Picture and Ensemble though.) BAFTA has actually nominated eight pairs of supporting actors from the same film and SAG has nominated five duos since the Oscars last did.

The Oscars have double-nominated eight films for Best Supporting Actress since “Bugsy.” There tends to be less competition on the women’s side and the pairs are able to solidify themselves in the precursors. No pair of supporting actors from the same film in the last 26 years has been nominated together at even three out of the Globes, Critics, BAFTA and SAG, but six of the eight pairs of Best Supporting Actress nominees from the same films in the last 26 years were nominated together by at least three out of those four groups before the Oscars. This suggests that when it is going to happen again in Best Supporting Actor, there will be little doubt about it.

CORRECTION: An earlier draft of this article mistakenly said that “Crash” was one year before “No Country for Old Men” instead of two.