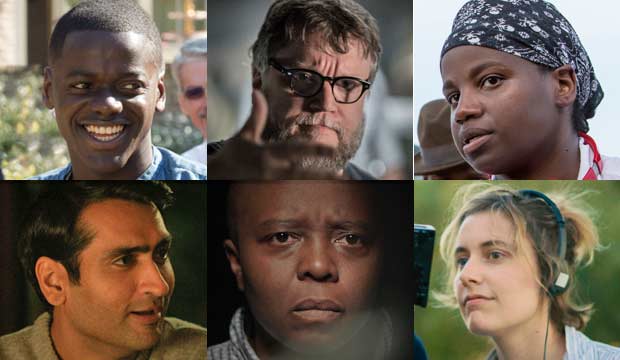 It’s a glass-half-full year at the Oscars when it comes to diversity. A number of women and people of color were represented in the nominations in front of and behind the camera thanks to films like “Get Out,” “Mudbound,” “The Shape of Water,” “Lady Bird,” and “The Big Sick.” But while I’m celebrating inclusion — No #OscarsSoWhite or #OscarsSoMale this year — it’s still worth aiming higher, especially for groups that still aren’t very well represented among Oscar contenders or in films in general. Check out the complete list of nominations here.

To start, the Best Picture nominees are encouraging from a gender standpoint. In terms of their lead characters they’re almost evenly split: four films have exclusively male leads (“Call Me by Your Name,” “Darkest Hour,” “Dunkirk,” and “Get Out”), three have exclusively female leads (“Lady Bird,” “The Shape of Water,” and “Three Billboards”), and two have male and female co-leads (“Phantom Thread” and “The Post”). Only one of those films is centered on a nonwhite character (“Get Out”). That makes me raise an eyebrow at the lack of “The Big Sick” and “Mudbound,” which had more precursor support than, say, “Phantom Thread,” but again, glass half-full.

That “Get Out” was nominated at all is remarkable given what an unusual awards contender it is. It’s a horror satire from 11 months ago that directly confronts American racism in the modern era and not just in a historical context where today’s audiences can more comfortably draw moral lines (slavery bad, Martin Luther King good). Its filmmaker Jordan Peele also earned nominations for Best Director and Best Original Screenplay, which makes him the first black artist nominated for writing, directing, and producing in the same year.

Also nominated for “Get Out” is Daniel Kaluuya for Best Actor. It’s his first bid, and he happens to be joined by the most nominated black actor in history, Denzel Washington (“Roman J. Israel, Esq.”), who contends for his eighth acting prize and his ninth overall when you count his Best Picture nomination last year as a producer of “Fences.” It has been exactly 30 years since Washington’s very first Oscar nom, Best Supporting Actor for “Cry Freedom” (1987).

In the Best Supporting Actress race two black women make history. Octavia Spencer (“The Shape of Water”) is only the second black actress to earn three Oscar nominations after Viola Davis did the same last year, and she’s the first to earn two nominations after winning. She’s up against Mary J. Blige (“Mudbound”), who is also a contender for Best Song for co-writing “Mighty River” for that film. That makes her the first person nominated for acting and songwriting in the same year and the first black woman to earn multiple Oscar nominations in any one year.

SEEOscars tragically snub ‘Coco’ for Best Picture nomination: Why do they hate animated films so much?

Best Director and Best Original Screenplay are especially diverse. In addition to Peele becoming the fifth black director to be nominated, Guillermo Del Toro (“The Shape of Water”) is the fifth Latin American nominee and Greta Gerwig (“Lady Bird”) is the fifth female nominee. Those three are also in the running for Best Original Screenplay, as is Pakistani-American writer Kumail Nanjiani (“The Big Sick,” with his wife and co-writer Emily V. Gordon), who is the fifth nominee in that category of Asian descent.

And those are just the top eight categories. There are other noteworthy achievements elsewhere on the ballot, including Syrian filmmakers Feras Fayyad and Kareem Abeed (“Last Men in Aleppo,” Best Documentary Feature) and black transgender filmmaker Yance Ford (“Strong Island,” Best Documentary Feature). The frontrunner for Best Animated Feature is devoted to Mexican culture (“Coco”) and features a predominantly Hispanic cast of voice actors, though its nominated director and producer are both white.

It’s also worth noting that a Best Picture nominee centering on a same-sex love story (“Call Me by Your Name”) doesn’t raise eyebrows anymore (though the lead actors are straight), and neither does a Best Foreign Language Film about a transgender woman (“A Fantastic Woman”) where the lead role is actually played by a transgender actress.

So really, we can look at the glass as three-quarters full. But it shouldn’t be forgotten that films about Latin American characters and Asian characters are still few and far between in theaters and ultimately at the Oscars. Native American stories are even rarer. As we can see from this year’s nominees, the more kinds of stories that get told by more kinds of people, the better art gets. So let’s cast the net even wider.