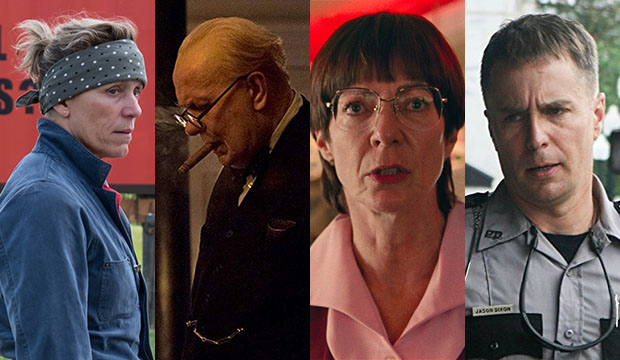 Are we poised to get the first-ever Grand Slam of acting sweeps?

Frances McDormand (“Three Billboards Outside Ebbing, Missouri”), Gary Oldman (“Darkest Hour”), Allison Janney (“I, Tonya”) and Sam Rockwell (“Three Billboards”) have all won Golden Globes and Critics’ Choice prizes for their work so far. If their win streaks continue through the Screen Actors Guild Awards, the BAFTAs and the Oscars, this would be the first time that all four acting champs won all five major awards in the same season.

That might sound shocking since there are so many individual sweepers every year, but since the BAFTAs moved their ceremony prior to the Oscars 17 years ago, no quartet of Oscar acting winners has gone 20-for-20, whether due to an upset (insert requisite Aaron Taylor-Johnson mention here), a snub or eligibility issues. The closest this came to occurring was three years ago, when Eddie Redmayne (“The Theory of Everything”), Julianne Moore (“Still Alice”), J.K. Simmons (“Whiplash”) and Patricia Arquette (“Boyhood”) went 19/20. Michael Keaton (“Birdman”) prevented this sweep by defeating Redmayne at Critics’ Choice.

There have been two instances of 18/20. Eight years ago, lead Oscar winners Jeff Bridges (“Crazy Heart”) and Sandra Bullock (“The Blind Side”) missed at BAFTA — Bridges lost to local boy Colin Firth (“A Single Man”) and Bullock was ineligible because her film hadn’t been released in the U.K. yet. BAFTA was the culprit again the following year, this time in the supporting categories. “The King’s Speech” stars Geoffrey Rush and Helena Bonham Carter prevailed while Oscar went with frontrunners and “The Fighter” co-stars Christian Bale and Melissa Leo, the latter of whom wasn’t nominated at BAFTA.

In our latest slugfest, we briefly discussed the possibility of this unprecedented sweep happening now that we have a little bit more clarity after a week of awards and nominations. McDormand has pulled ahead of a heretofore tight Best Actress race, thanks to her rapturous reception and speech at the Globes. Our odds have her as the favorite for the SAG, BAFTA and Oscar. We’re also predicting smooth sailing for Oldman from here on out, as he cleared his biggest hurdle at the Globes, whose voters seem to have let bygones be bygones after he dissed them in an infamous “Playboy” interview four years ago.

In the supporting races, Rockwell and Janney saw their stocks rise after defeating their main rivals Willem Dafoe (“The Florida Project”) and Laurie Metcalf (“Lady Bird”) at the Globes and Critics’ Choice. Dafoe and Metcalf had been crushing it with the critics awards, but the tide appears to have turned. (Critics’ Choice voting also opened the day after the Globes, so do with that what you will.) Still, our odds are not forecasting a clean sweep for either of them yet. Rockwell is only predicted to take BAFTA, with Dafoe grabbing SAG and Oscar. Meanwhile, Metcalf is projected to win the remaining three awards.

But if history tells us anything, it’s that this Grand Slam acting sweep is more likely not to happen. If that’s the case, who might be the disruptor(s) this year?