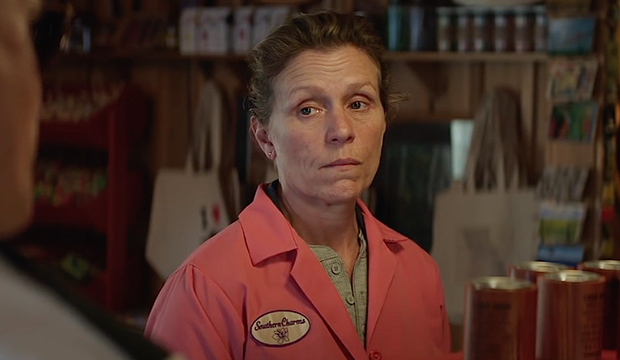 Frances McDormand (“Three Billboards Outside Ebbing, Missouri”) solidified her lead in the Oscar race for Best Actress with her win at the SAG Awards on Jan. 21, after picking up prizes at both the Critics’ Choice and Golden Globe awards earlier in the month. As of this writing, McDormand has the backing of all 13 of our Oscar experts drawn from major media who have weighed in on this race (see their individual rankings and overall odds). That solid support translates into leading odds of 3/2.

McDormand headlines Martin McDonagh‘s character study, which is a leading contender for the Best Picture prize. She plays a grieving mother who tries to shame the local police chief (Woody Harrelson) into investigating the murder of her daughter. While McDonagh was nominated for his original script, he was snubbed for his direction. The Tony-nominated playwright won the Best Live Action Short Oscar in 2004 for “Six Shooter.”

According to our pundits, McDormand’s closest challenger is Saoirse Ronan, who won a Golden Globe on the comedy side for “Lady Bird.” She sits in the runner-up position according to 11 of our experts; that give her odds of 4/1 to pull off an upset. One-time frontrunner Sally Hawkins, who piled up critics awards for her performance in “The Shape of Water,” is the second-place pick of the other two experts; that equals odds of 9/2.

McDormand numbers just a single Best Actress bid among her four Oscar nominations but it was the one that proved to be the winner (“Fargo,” 1996). Ronan lost her Oscar bids for “Atonement” (2007) and “Brooklyn” (2015) while Hawkins was an also-ran in the supporting race four years ago for “Blue Jasmine.”

Rounding out the race is first-time nominee Margot Robbie for “I, Tonya,” in which she plays disgraced figure skater Tonya Harding, and academy favorite Meryl Streep, who reaped her 21st bid for her portrayal of newspaper publisher Katharine Graham in “The Post.” Both have odds of 9/1.