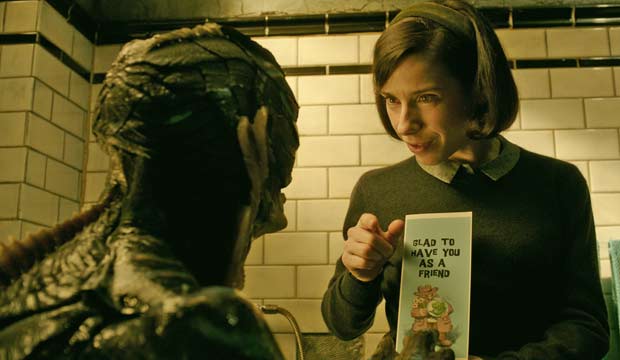 There has been a question in the back of my mind for much of the 2017-2018 movie awards season. It may be trivial, but in this case it might be historic: is “The Shape of Water” a science-fiction film? Strictly defining its genre may be splitting hairs, but since it won the Oscar for Best Picture the distinction matters in one sense: it would be the first sci-fi film to have ever won the top prize. What do you think? Scroll down to vote in our poll at the bottom of this post, and check out the complete list of Oscar winners here.

“The Shape of Water” is framed as a fairy tale of sorts about Eliza (Sally Hawkins), a mute janitor who befriends and ultimately falls in love with a fish man (Doug Jones). She must help the amphibious creature escape before he’s killed by the military men who have been experimenting on him. Much of the action takes place in a science lab, and one of the most sympathetic characters is Michael Stuhlbarg as a scientist who also wishes to protect the prisoner. But despite those scientific trappings the nature and origin of the creature aren’t definitively established on scientific terms, and it has special abilities that seem closer to magic, which I think would put the film more in the realm of fantasy.

Either way the film would be historic. Only one fantasy film had ever won Best Picture before: “The Lord of the Rings: The Return of the King” (2003). To do that director Peter Jackson had to assemble a nine-hour epic of unprecedented scale and scope, and they still didn’t give it to him until his third try after losing for the first two installments of the trilogy.

But no science-fiction film had ever won before despite more sci-fi films being embraced in recent years like “Avatar” (2009), “District 9” (2009), “Gravity” (2013), “The Martian” (2015) and “Arrival” (2016). Voters have always had an aversion to genre films, perhaps writing them off as popcorn entertainment while celebrating more traditional films set in the real world. But perhaps “The Shape of Water” is evidence that the younger, more diverse and more international members the academy has been courting are more open to the genres that the Oscars have ignored in the past. Voters also nominated a horror movie this year, “Get Out,” which won Best Original Screenplay and was itself within striking distance of that Best Picture Oscar.

So what do you think? Is “The Shape of Water” the first science-fiction film ever to win Best Picture? Or is it the second fantasy film? Perhaps it’s neither, or both. Vote below.