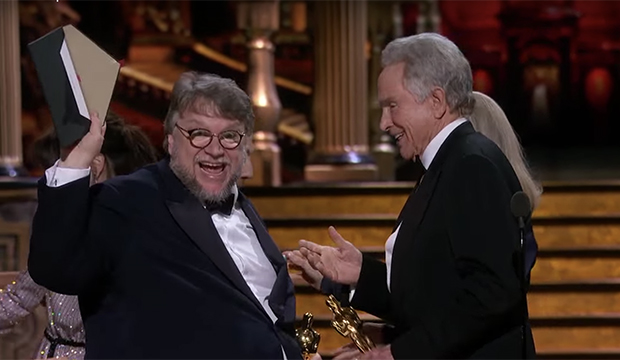 “If you are a nominee tonight who isn’t making history, shame on you,” Jimmy Kimmel chided in his Oscars monologue Sunday. “The Shape of Water” doesn’t need to saunter off with its head down because the Best Picture champ made a whole lot of history by taking the top prize, one of four awards it won.

Here’s a list of all the droughts that were ended, records that were set and stats that were killed (say it with me: no SAG ensemble nomination!) by “The Shape of Water” with its Best Picture victory.

– First film since “Braveheart” to win without acting, writing or editing wins

– First film to win without a writing award since “The Artist” (2011). Before that, it was “Million Dollar Baby” (2004). In all three instances, the screenplay winners were their films’ sole wins of the night: “Get Out” and “Call Me by Your Name”; “Midnight in Paris” and “The Descendants”; “Eternal Sunshine of the Spotless Mind” and “Sideways.”

– First film to win with a directing award but no writing award since “The Artist.” Before that, it was “Million Dollar Baby.”

– First film since “Birdman” (2014) and ninth overall to win while losing three or more acting nominations. Before that, it was “Dances with Wolves” (1990).

– First film with the most nominations to win since “Birdman” and only the third one this decade; “The King’s Speech” (2010) was the other.

– First film since “Birdman” to win the PGA and Best Picture

– First fantasy film and second overall to win since “The Lord of the Rings: The Return of the King” (2003)

– First Best Picture champ to win Best Production Design since “The Lord of the Rings: The Return of the King”

– First Best Picture champ with Best Director, Best Original Score and Best Production Design as its only other awards