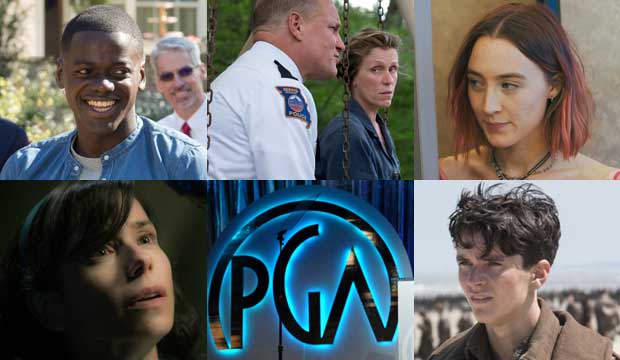 Predicting the Producers Guild Awards used to be relatively simple. Because they correlate so strongly with the Oscars, you could work backwards and pick whatever you think will be the academy’s top choice. And you’d usually be right: the PGAs and Oscars agreed eight times in a row from 2008 to 2015. But what do you do after two years in a row where the PGA winner has split from the Oscars? You get Experts predictions as divided as they are right now just days before the awards are handed out on Saturday, January 20.

In 2016 the PGA picked “The Big Sick” while the Oscars went with “Spotlight.” Then in 2017 the PGA picked “La La Land” while the Oscars opted for “Moonlight.” As of this writing “Three Billboards Outside Ebbing, Missouri” has a narrow lead in this year’s PGA race with 3/2 odds. But every single one of our prediction groups is divided: the Expert film journalists we’ve polled, the Editors who cover awards year-round for Gold Derby, the Top 24 Users who got the highest scores predicting last year’s PGA winners, and the All-Star Top 24 who got the highest scores when you combine the last two years’ PGA results.

Our Editors aren’t any more decisive: Chris Beachum, Rob Licuria, and O’Neil are predicting “Three Billboards” while Eng is picking “Lady Bird” and I’m out on a limb for “The Shape of Water.”

Our Top 24 and our All-Stars are all over the map, split between the five above mentioned films: “Three Billboards,” “Lady Bird,” “Get Out,” “Shape of Water,” and “Dunkirk.”

So what’s an awards pundit to do? Are you more confident about your PGA picks than we are? And will the winner go on to claim Oscar, or will the two awards groups split for the third time in a row?

Be sure to make your PGA predictions so that Hollywood insiders can see how their films and performers are faring in our odds. You can keep changing your predictions until just before winners are announced on January 20. And join in the fierce debate over the 2018 PGA Awards taking place right now with Hollywood insiders in our movie forums. Read more Gold Derby entertainment news.