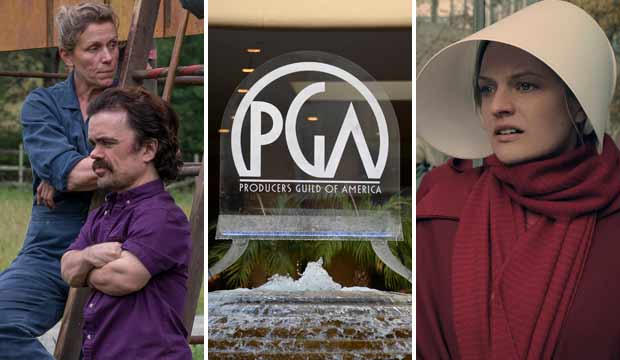 The Producers Guild Awards have been one of the most closely watched races in the run-up to Oscars because they have presaged the academy’s choice for Best Picture eight times in the last 10 years. However, the two times they disagreed were the last two years in a row, despite the fact that the PGA uses the same preferential ballot that decides the Oscars. Are they still a reliable bellwether? Scroll down for our complete predictions in eight categories for film as well as TV. The nominees are ranked in order of their racetrack odds, with the projected winners highlighted in gold.

There are 11 nominees for Best Picture at this event, and chances are good most of the eventual Oscar nominees for Best Picture — if not all of them — are on the PGA’s list. We’re currently predicting a victory for “Three Billboards Outside Ebbing, Missouri,” but this is a close race where it faces a tough challenge from four other movies: “Lady Bird,” “Get Out,” “The Shape of Water,” and “Dunkirk.”

But the winner here may not necessarily become the Oscar frontrunner. Two years ago “The Big Short” pulled off a surprise victory over “The Revenant” and “Spotlight,” but then “Revenant” won the Directors Guild and “Spotlight” won the Oscar anyway. Last year the PGA Awards were an easy call for “La La Land,” which looked like it was on its way to a sweep of the awards season, but then it tripped at the finish line and “Moonlight” claimed the top Oscar.

Thankfully, other PGA races appear more clear-cut. “Coco” looks almost unbeatable for Best Animated Feature, while on the TV side “The Handmaid’s Tale” (Best Drama Series), “Last Week Tonight with John Oliver” (Best TV Variety Series), and “The Voice” (Best TV Reality Competition Series) are strong front-runners. Do you agree with our forecasts? Check out our predictions below, and make sure to enter or update your picks here before awards are handed out on Saturday night, January 20.

Be sure to make your PGA predictions so that Hollywood insiders can see how their films are faring in our odds. You can keep changing your predictions until just before winners are announced on January 20. And join in the fierce debate over the 2018 PGA Awards taking place right now with Hollywood insiders in our movie forums. Read more Gold Derby entertainment news.