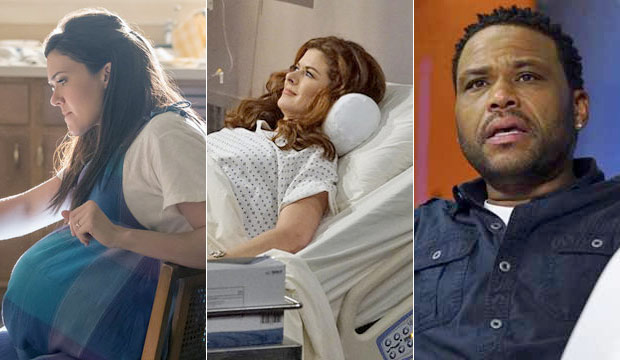 Make no mistake about it: Friday was a sad day for broadcast TV networks as the Big Four (NBC, ABC, CBS, Fox) experienced a historic shut-out in the drama/comedy/long-form races at the Producers Guild of America Awards. (See complete list of 2018 PGA nominations). Recent Golden Globe nominees “This Is Us,” “Will & Grace” and “Black-ish,” which hail from the broadcast nets, were all skunked in favor of shows from prestige streaming and pay-cable networks. Scroll down to see all of this year’s major PGA Awards snubs in the major three narrative categories.

The PGA nominees for Best Drama Series are: “Big Little Lies” (HBO), “The Crown” (Netflix), “Game of Thrones” (HBO), “The Handmaid’s Tale” (Hulu) and reigning champ “Stranger Things” (Netflix). “Big Little Lies” competed as a limited series at the Globes, Emmys and SAG Awards, but the PGA Awards rightly put it in drama as a second season is in the works. Last year’s eligible PGA nominees “Better Call Saul” and “House of Cards” did not return to the lineup, joining “This Is Us,” “Mindhunter,” “The Deuce,” “The Good Doctor” and “American Gods” on the sit-out bench.

This year’s Best Comedy Series lineup consists of: “Curb Your Enthusiasm” (HBO), “The Marvelous Mrs. Maisel” (Amazon), “Master of None” (Netflix), “Silicon Valley” (HBO) and “Veep” (HBO). Last year’s PGA winner “Atlanta” was not eligible to return as new episodes didn’t air within the 2017 calendar year. Former nominees “Modern Family,” “Black-ish” and “Will & Grace” are sitting out this year, while other snubbed comedies include “GLOW,” “Insecure,” “The Good Place,” “Better Things” and “Unbreakable Kimmy Schmidt.”

The long-form category, which combines limited series and telefilms, is made up of the following: “Black Mirror” (Netflix), “Fargo” (FX), “FEUD: Bette and Joan” (FX), “Sherlock: The Lying Detective” (PBS) and “The Wizard of Lies” (HBO). Missing from this year’s list of PGA nominations are fan favorites like “Twin Peaks,” “Top of the Lake: China Girl,” “The Sinner,” “Godless” and “Genius.”