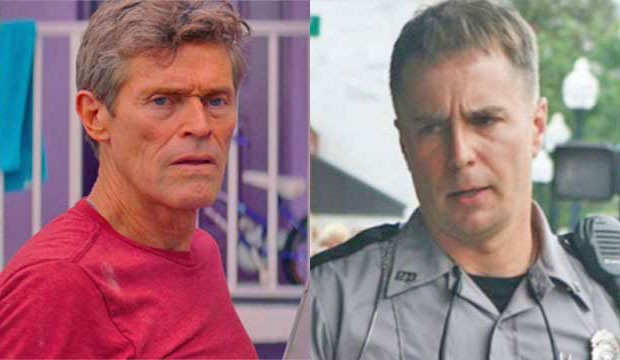 Willem Dafoe has won a whopping 18 Best Supporting Actor awards from various critics groups for his heartbreaking performance in “The Florida Project.” He was the frontrunner to win this same race at the Oscars for most of awards season. However, he has lost at two key precursor prizes — the Golden Globes and Critics’ Choice Awards — to Sam Rockwell (“Three Billboards Outside Ebbing, Missouri”).

Those losses, coupled with Rockwell’s respectable showing in the regional races (eight wins) make him a strong Oscar contender. Dafoe has been nominated for Best Supporting Actor twice before (for “Shadow of the Vampire” and “Platoon”), while Rockwell will be an Oscar rookie.

Dafoe’s loss at the Globes is easily explainable. Rockwell won for playing a colorful villain – beating out Dafoe, who played a character who was the heart and soul of his film. This followed the same pattern of the Best Supporting Actor award the year before. Aaron Taylor-Johnson took home the Golden Globe for a similar turn in “Nocturnal Animals” edging out, among others, Mahershala Ali for “Moonlight.”

Four days after the Globes came the Critics’ Choice Awards. Unlike their print counterparts, the broadcast film critics went with Rockwell. That loss put Dafoe 0 for 2 with the televised precursors in advance of Sunday’s Screen Actors Guild Awards.

Rockwell is featured in a film that has a leading four SAG bids (including for the cast overall, leading lady Frances McDormand and supporting player Woody Harrelson) while Dafoe is the lone representative of his movie, as he was at both the Globes and Critics’ Choice Awards. If Rockwell wins at SAG as well, it will confirm his status as Oscar frontrunner. A win by Dafoe turns this into a much closer contest.