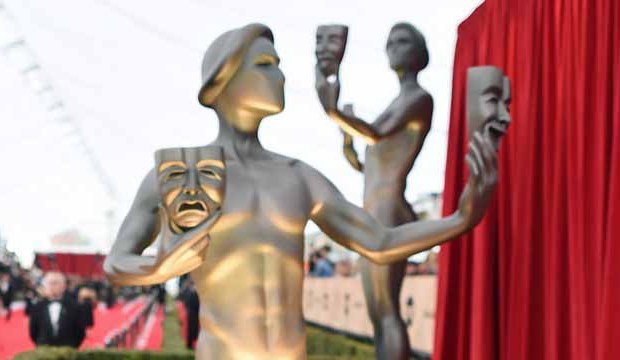 Breaking with the tradition of having the prizes presented by a man and a woman, this year’s SAG Awards will have only women handing out the awards in the 6 film and 9 TV categories on Sunday, Jan. 21. The only men you will see on the stage of the Shrine Auditorium will be the winners of the five races for male actors as well as those in the casts of the winning ensembles and the nominated films.

As per tradition, the nominated casts of the five films will present clips of their performances. Joining their female co-stars on stage to introduce these segments will be various male actors. The roster includes: Daniel Kaluuya with Allison Williams (“Get Out”), Jason Clarke with Mary J. Blige (“Mudbound”), Kumail Nanji and Ray Romano with Holly Hunter (“The Big Sick”), and Woody Harrelson and Sam Rockwell with Frances McDormand (“Three Billboards Outside Ebbing, Missouri”). The clip from the fifth nominated film, “Lady Bird,” will be introduced by Laurie Metcalf and Saoirse Ronan.

As always, the telecast will open with various actors telling their stories of how they got their guild cards. This year, it will only be women in the spotlight. And for the first time in the 24-year history of these awards there will be a host: “The Good Place” star Kristen Bell.

PREDICT the SAG Awards winners; change them until January 21

We are predicting the winners of all 15 Screen Actors Guild Awards races. Our forecasts are based on a combination of five sets of predictions by: 23 Experts (journalists from outlets like Deadline, Variety who write about the SAG Awards); our eight Editors; Top 24 Users (those two dozen folks who scored the best predicting last year’s winners); the All-Star 24 (users who did the best for the last two years combined); and thousands of reader just like you.