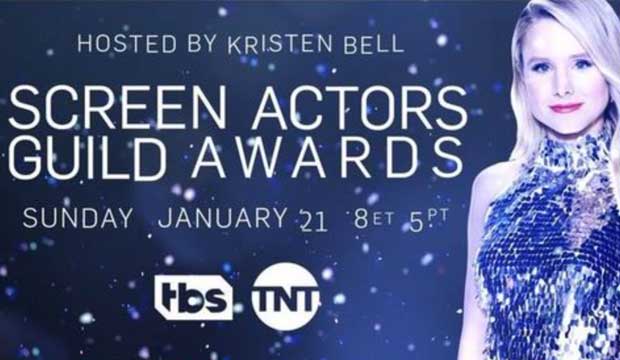 Gold Derby editors and contributors can’t stifle what we think of every moment of the 2018 SAG Awards live telecast on Jan. 21 that airs live nationwide on TBS and TNT beginning at 8:00 p.m. ET/5:00 p.m. PT and is hosted by Kristen Bell (“The Good Place”).

SEE 2018 SAG Awards: How were the winners decided by the Screen Actors Guild?

DANIEL MONTGOMERY: Solid opening monologue by Kristen Bell. Short and sweet, a few good quips, and straight into the awards.

Outstanding Performance by a Female Actor in a Comedy Series– Julia Louis-Dreyfus, “Veep”

JOYCE ENG: I love that Julia Louis-Dreyfus is now the most decorated SAG champ and I am so sad that she couldn’t be there for it.

Outstanding Performance by an Ensemble in a Comedy Series– “Veep”

AMANDA SPEARS: Such a deserving win! What a shame JLD couldn’t be there to enjoy it!

DANIEL MONTGOMERY: I wonder if the Netflix spell has worn off at the SAG Awards. 0-for-3 on the comedy side.

MATT NOBLE: Finally “Veep” wins ensembles It’s unique use of improv and collaboration amongst the cast means it’s been one of the biggest oversights from a group that also never awarded the “Arrested Development” or “Office” casts.

MARCUS JAMES DIXON: So unbelievably happy that “Veep” just took home its first ensemble prize. While this wasn’t the show’s strongest season, it’s great that the cast is now full of SAG winners.

Outstanding Performance by a Female Actor in a Supporting Role– Allison Janney, “I, Tonya”

ANDREW CARDEN: I so adore Allison Janney but Laurie Metcalf is being so, so robbed this awards season.

AMANDA SPEARS: So unless Metcalf can pull off a miracle at BAFTA its over.

ANDREW CARDEN: And there’s the ballgame in Supporting Actor too. Turns out Woody Harrelson’s presence on the ballot doesn’t hurt Sam Rockwell.

ANDREW CARDEN: For fans of awards season stats – Eddie Murphy and Lauren Bacall are the lone Supporting Actor/Actress contenders to win at GG/SAG and lose on Oscar night.

DANIEL MONTGOMERY: I wish all these film acting awards weren’t the same at event after event. In such a divided year for Best Picture, it doesn’t feel like a true reflection of the year in film. It’s like most of these awards are playing follow the leader.

CHRIS BEACHUM: Alexander Skarsgard was hilarious! That’s his best speech in winning all these awards in the past few months.

JOYCE ENG: All the awards for ASkars — I mean, the tall dude from True Blood.

AMANDA SPEARS: “Big Little Lies” is the fourth Miniseries from HBO (“Angels in America,” “Elizabeth” and “John Adams”) to sweep the Miniseries/TV movie categories and the first to do so where both winners were not Oscar Winners or Nominees.

ROB LICURIA: Nicole Kidman should win all of the awards. She’s the real deal.

DANIEL MONTGOMERY: Nicole Kidman has given so many acceptance speeches this, I’m impressed by how memorable she makes every one. She should, like, act for a living.

ANDREW CARDEN: Fabulous as Nicole Kidman was, it’s a damn shame Jessica Lange and Susan Sarandon will go without having won a single award for their extraordinary work.

MARCUS JAMES DIXON: Nicole Kidman’s speech was the best of the night so far. I loved that she mentioned all of the actresses who helped pave the way for her and others.

CHRIS BEACHUM: Rita Moreno was the perfect choice to present the award to Morgan Freeman! I loved “The Electric Company” in the 1970s. And that was an excellent package with his career clips!

DANIEL MONTGOMERY: Can someone write a romantic comedy for Morgan Freeman and Rita Moreno to star in please? They’re wonderful together.

JOYCE ENG: The SAGs do not need a host, but if they insist, it should be Rita Moreno and Morgan Freeman every year.

MARCUS JAMES DIXON: I want the soundtrack from “The Shawshank Redemption” to play whenever I walk into a room.

CHRIS BEACHUM: I want Morgan Freeman to narrate my entrance into any room.

Outstanding Performance by a Male Actor in a Drama Series– Sterling K. Brown, “This Is Us”

MATT NOBLE: Olivia Munn and Nicey Nash should present together at every award show.

DANIEL MONTGOMERY: Best part about airing these awards on basic cable: they don’t censor the S-bombs out of the acting clips.

AMANDA SPEARS: The first African American nominated and winner! I love that he thanked the younger Randall’s!!

Outstanding Performance by a Female Actor in a Drama Series– Claire Foy, “The Crown”

AMANDA SPEARS: The goodbye hug! And the first time Foy’s been able to best Moss.

ANDREW CARDEN: Claire Foy! At last, something of an upset!

JOYCE ENG: Not the Elizabeth anyone expected to win.

MATT NOBLE: After Moss takes out the Emmy and Globe it’s refreshing to see Foy win here for “The Crown” which had a sophomore season that improved on its impressive first outing.

TONY RUIZ: A category honoring casts, but the “Game of Thrones” clip focuses almost solely on a CGI dragon

AMANDA SPEARS: I agree the “GOT” clip was almost all CGI but at least it wasn’t a commercial for the show. Did SAG’s Netflix subscription kinda get cancelled???

TONY RUIZ: WOW! So great to see the entire cast of “This Is Us” get the recognition it deserves. And how cute was their reaction? Even Sterling seemed blown away.

CHRIS BEACHUM: Wonderful win for “This Is Us” and NBC! They finally gave the show an award other than just for Sterling!

ROB LICURIA: So, SAG voters didn’t love The Handmaids Tale. Got it.

JOYCE ENG: This Is Us’ snub last year was a fluke. They totally could’ve beaten “Stranger Things.”

AMANDA SPEARS: Was Kaluuya nominated or Catherine Keener because that clip made it hard to tell!

TONY RUIZ: Oldman may be a lock to win, but he really seemed moved on the podium.

JOYCE ENG: I love that Frances McDormand is the one to break the SAG lead actress stat of no one having won it twice.

TONY RUIZ: Standing ovation for McDormand. And then she just gets on that stage and gives a knock out speech.

Outstanding Performance by a Cast in a Motion Picture– “Three Billboards Outside Ebbing, Missouri”

AMANDA SPEARS: Thank You for joining us! We hope to see you back here on Sunday, March 4th for the 90th Annual Academy Awards!!