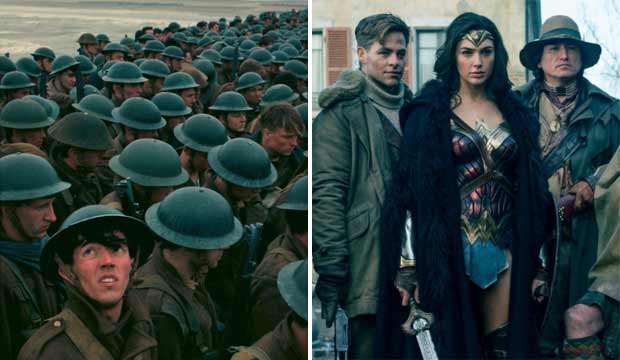 The SAG Awards have been honoring the best ensemble casts in film and television for the last 23 years, and for the last 10 years they’ve also been celebrating the best stunt ensembles, who if they’re doing their jobs right should be more or less invisible on the big screen. When there’s a major Oscar contender among the action-packed nominees it usually wins, like “The Dark Knight” (2008), “Inception” (2010), “Mad Max: Fury Road” (2015), and “Hacksaw Ridge” (2016). Does that mean this category is a slam dunk for “Dunkirk”?

The film is also backed by six out of eight Editors who cover awards year-round for Gold Derby: Chris Beachum, Eng, Matt Noble, O’Neil, Paul Sheehan, and myself.

It doesn’t hurt that “Dunkirk” is a Christopher Nolan movie, just like aforementioned past winners “The Dark Knight” and “Inception.” His film “The Dark Knight Rises” (2012) also earned a nomination, so the guild is clearly fond of the stunt work in his films. It also helps that “Dunkirk” is a war movie, as were three of the last four champs: “Lone Survivor” (2013), “Unbroken” (2014), and “Hacksaw Ridge.” Unsurprisingly, war movies have some of the showiest stunt work as they often involve large ensembles engaged in extensive action sequences.

However, “Dunkirk” isn’t the only war movie in the running. Technically “Wonder Woman” counts as a war film since the superhero story is set during World War I. Four of our Experts predict it will upset: Bonnie Fuller (Hollywood Life), Sasha Stone (Awards Daily), Anne Thompson (IndieWire), and Brian Truitt (USA Today). Our Editor Marcus James Dixon is also betting on “Wonder Woman.”

And while most of our top users agree that “Dunkirk” is out front, “Wonder Woman” is supported by six of our Top 24 Users who got the highest scores predicting last year’s SAG Award winners and three of our All-Star Top 24 who got the highest scores when you combine the last two years’ predictions. When all forecasts at Gold Derby are combined “Wonder Woman” places second with odds of 7/2.

Lastly, one renegade Editor, Rob Licuria, is going out on a limb for the car-chase-driven action comedy “Baby Driver,” which has had a strong run so far with industry guilds including nominations from the American Cinema Editors, the Cinema Audio Society, and the Makeup Artist and Hair Stylist Guild. It also earned nominations at the Golden Globes and BAFTAs and won for its editing at the Critics’ Choice Awards, so don’t count it out. But it trails in third place in our predictions with 20/1 odds overall.

Do you agree with our SAG Awards forecasts? Might we be underestimating the remaining two nominees, “Logan” (66/1 odds) and “War for the Planet of the Apes” (66/1 odds)?