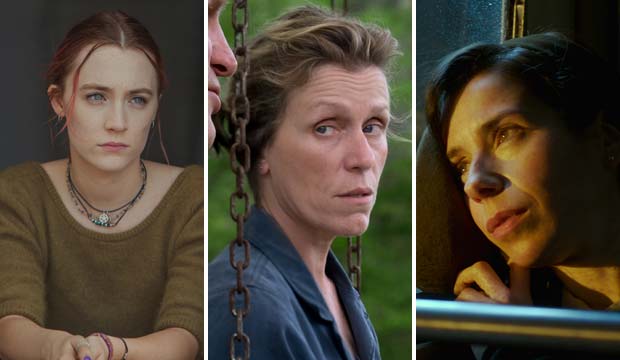 In what has been a highly competitive Oscar race for Best Actress, Frances McDormand (“Three Billboards Outside Ebbing, Missouri”) has surged ahead after victories at the Golden Globes and Critics’ Choice Awards. Next up she’s the favorite to win at the SAG Awards, but this may not be an open-and-shut case. The groups that decided Critics’ Choice and the Globes have nothing to do with the 120,000 SAG-AFTRA union members who decide these prizes, which will give us our first indication of how industry insiders view this contest.

It’s rare for all our Experts to be in lockstep, but they’re the only ones who are so unwaveringly confident. Our Editors who cover awards year-round for Gold Derby generally agree with the consensus, with seven out of the eight currently betting on McDormand: Chris Beachum, Eng, Marcus James Dixon, Matt Noble, O’Neil, Paul Sheehan, and myself. But renegade Editor Rob Licuria is predicting Saoirse Ronan (“Lady Bird”), who ranks second in our overall predictions with 6/1 odds. Ronan also won a Best Actress Golden Globe — Ronan took the comedy/musical race while McDormand prevailed for drama — so we mustn’t count her out.

But that’s not all. “The Shape of Water” star Sally Hawkins is still in this race as well. She ranks third with 14/1 odds, and she’s supported by three of our Top 24 Users and three of our All-Stars. Unlike “Three Billboards” and “Lady Bird,” “The Shape of Water” was surprisingly snubbed from the top ensemble category. Does that indicate limited support for the film? Or will the snub inspire voters to rally behind Hawkins here?