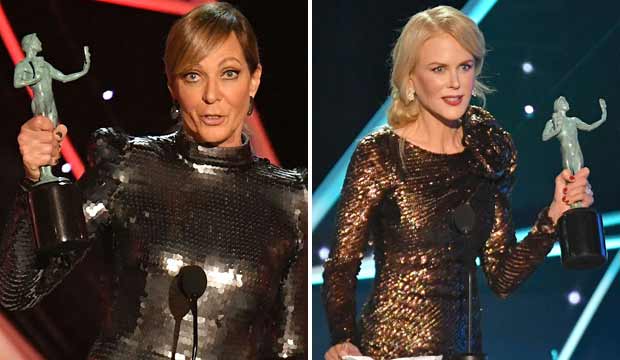 Ladies and gentlemen, we have Oscar frontrunners. As the Screen Actors Guild Awards unfolded at the Shrine Auditorium in downtown Los Angeles, our forum posters let rip with their cheers and jeers. There were few surprises on the film side, with “Three Billboards Outside Ebbing, Missouri” taking the top prize for its ensemble and Gary Oldman (“Darkest Hour”), Frances McDormand (“Three Billboards”), Sam Rockwell (“Three Billboards”), and Allison Janney (“I, Tonya”) winning their respective acting prizes, all of which were predicted by Gold Derby.

However, there were several jaw-droppers in the TV categories, including “This Is Us” and “Veep” winning drama and comedy ensemble awards over predicted frontrunners “The Handmaid’s Tale” and “GLOW.” Comedy actor William H. Macy upset Sean Hayes (“Will & Grace”) to win his third award in four years for “Shameless.” And the Queen herself, Claire Foy, took her second consecutive prize in the race for drama actresses for “The Crown,” taking down Emmy-winner Elisabeth Moss for “The Handmaid’s Tale.”

Below is just a sampling of what was dished in the forums during the telecast, which aired on TNT and was hosted by Kristen Bell. Take a look, then dive in if you dare. And check out the complete list of winners here.

Marcus Snowden (The Artist Formerly Known as msnowden1): JLD! Now that’s a win I can get behind.

Miles: Hmm… predicted Alison Brie, which was a dumb move on my part. I guess I should’ve known that the love for JLD was still there.

ENSEMBLE IN A COMEDY SERIES: “VEEP”

Sean C: Well, at least it wasn’t [“Orange is the New Black”] again.

Emmyfan: Sorry, but that “Veep” acceptance speech for Comedy Ensemble was a mess. Not funny.

BenitoDelicias: Wow. This was like the obvious win for De Niro because he had zero competition in my mind, including from Skarsgard because of the joint categories.

Sagand: Urg … Thinking of all the incredible parts and actors that have failed to sweep with TV roles and Skarsgard did for a part any competent actor could have done.

BamaEd: I forgot that Nicole Kidman had never won a SAG Award. Congrats to her.

MALE ACTOR IN A DRAMA SERIES: STERLING K. BROWN (“THIS IS US”)

Miles: I went out on a limb and predicted Jason Bateman because why not. It’s funny that Brown won the Emmy for the first season but won Golden Globe and SAG for the second season.

FEMALE ACTOR IN A DRAMA SERIES: CLAIRE FOY (“THE CROWN”)

EmmyWinner: Foy? REALLY? Moss should win an Oscar for HER “Handmaid’s Tale” performance.

ENSEMBLE IN A DRAMA SERIES: “THIS IS US”

Lord Freddy Blackfrye: At least it wasn’t “The Crapmaid’s Tale.”

FEMALE ACTOR IN A SUPPORTING ROLE: ALLISON JANNEY (“I, TONYA”)

FreemanGriffin: I feel badly for Laurie Metcalf but Allison Janney was equally excellent. I guess this means Janney will win the Oscar and not Metcalf.

Noah Arlington: There goes Laurie Metcalf’s chance at getting the Oscar.

Joe Burns: Well, Rockwell got it – Dang, Dafoe’s chances are going down.

kbfr12: If he’s this emotional with a SAG award, they’re going to need a crash cart on stage at the Oscars.

Aint2Proud2Beg: Was there ever any doubt?

CAST IN A MOTION PICTURE: “THREE BILLBOARDS OUTSIDE EBBING, MISSOURI”

Noah Arlington: I can’t with this overrated movie, OMFG

Joe Burns: Yep “Three Billboards” is looking pretty good right now after sweeping SAG. If DGA goes to [Martin McDonagh], it looks like a pretty strong frontrunner. If DGA goes to [Guillermo Del Toro], “The Shape of Water” remains a very strong contender. It looks like the BAFTAs may have the most impact this year given they are handed out two days before Oscar voting officially starts on February 20th.

aahoto: It seems the only major race left is Best Picture: “Three Billboards” vs. “The Shape of Water.”