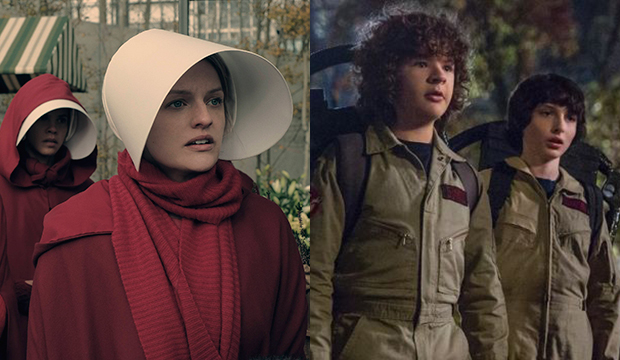 The “Stranger Things” cast’s reign at the Screen Actors Guild Awards may be brief. According to our latest predictions, the Netflix series will lose the drama ensemble award to “The Handmaid’s Tale,” which is ahead with 1/2 odds. “Stranger Things” is back with 7/2 odds, followed by longshots “This Is Us” (12/1 odds), “Game of Thrones” (33/1 odds) and “The Crown” (50/1 odds).

“The Handmaid’s Tale” has been on a roll since the Emmys, scooping up the Golden Globe and Critics’ Choice Award for Best Drama Series last week. Its frighteningly timely message may be too big and important to ignore — along with its predominantly female cast during the #MeToo and #TimesUp movements.

But given SAG’s love of repeat winners and big, populist hits, a second straight win for “Stranger Things” definitely cannot be ruled out. It also has two individual nominations, for David Harbour and Millie Bobby Brown, to one for “The Handmaid’s Tale” star Elisabeth Moss, and its well-received second season is more fresh in mind than Season 1 of “The Handmaid’s Tale,” which wrapped in June. Plus, there are probably some people hoping to see another insane speech from Harbour again or at least some crazy faces from Winona Ryder.

If “Stranger Things” defends its crown, it’d be the sixth show to win this award twice, after “Boardwalk Empire,” “Mad Men,” “Six Feet Under,” “The Sopranos” and “The West Wing.” All but “The Sopranos” won their trophies consecutively.