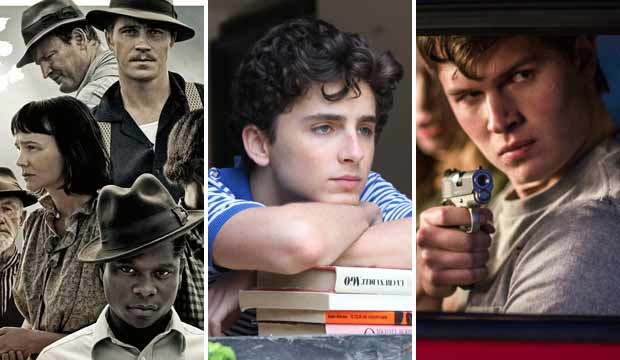 Last year at the SAG Awards we were shocked when “Hidden Figures” won the top prize for its ensemble cast over “Manchester by the Sea” and the eventual Oscar winner for Best Picture, “Moonlight.” Well, most of us were shocked. The 2018 awards season has been even more divided, so while, as always, we think we know who’s going to win, we should probably keep our eye out for some major upsets. Here are the top 6 shockers to watch out for.

“Lady Bird” cast — Though most of our users are torn between “Three Billboards Outside Ebbing, Missouri” and “Get Out” for the top prize, we shouldn’t take our eye off of “Lady Bird.” It’s tied with “Three Billboards” as the largest nominated ensemble with 11 credited cast members. This would also be an opportunity to honor lead actress Saoirse Ronan and supporting actress Laurie Metcalf if voters decide to go with Frances McDormand (“Three Billboards”) and Allison Janney (“I, Tonya”) in their respective categories. On top of that, this could also be a chance to give co-star Timothee Chalamet a consolation prize for fans of “Call Me by Your Name” since Chalamet isn’t expected to win his lead-acting prize for that romantic drama. (Current odds: 17/2)

“Mudbound” cast — The film tells a story of racial injustice, a subject that resonated in last year’s winner “Hidden Figures” and also in previous top winners “Crash” (2005) and “The Help” (2011). The film is evenly divided between its six main cast members, which makes this arguably the truest ensemble movie in the category. And then there’s the Netflix factor. The streaming service was a surprise nominee in the top category for “Beasts of No Nation” (2015), which unexpectedly won an individual acting award for Idris Elba‘s supporting role even though he was snubbed at the Oscars. And of course Netflix has been popular on the TV side as well with “Orange is the New Black,” “Stranger Things,” and “The Crown” all winning awards last year. Perhaps because Netflix is so easily accessible to a voting membership of more than 100,000, it gives their projects a possible leg up. (Current odds: 28/1)

Timothee Chalamet (“Call Me by Your Name”) — He’s 22-years-old, and no one has even won the SAG Awards’ lead-actor prize under age 30. But he was a favorite at the critics’ awards earlier in the season, and after “Call Me by Your Name” under-performed in the nominations — Chalamet is its only bid — all support for the film could end up consolidating here. Also, let’s not forget that the SAG Awards are where a young whippersnapper (Eddie Redmayne, “The Theory of Everything”) took down an overdue veteran (Michael Keaton, “Birdman”) three years ago on his way to Oscar. Perhaps history will repeat itself. (Current odds: 9/1)

Margot Robbie (“I, Tonya”) — The film has been over-performing at various events all season. She’s a young actress, which is often an advantage at industry awards. She gives a showy performance in a biographical role, which will undoubtedly impress her acting peers. And she already surprised us by winning the Critics’ Choice Award for Best Actress in a Comedy even though Saoirse Ronan had just won that award at the Golden Globes. This could be the moment when the entire momentum of this category shifts. (Current odds: 50/1)

Richard Jenkins (“The Shape of Water”) — The film under-performed in the nominations, missing out on bids for its ensemble cast and for Octavia Spencer‘s supporting performance. But Jenkins has been present at almost every major event thus far, and he plays arguably the most lovable role in this category as a kind neighbor to a mute Sally Hawkins who also narrates the story. This is Jenkins’s fourth nomination without a win, so the widely admired character actor may be due. (Current odds: 50/1)

“Wonder Woman” stunt ensemble — The stunt category at the SAG Awards usually goes to the most stunt-heavy movie that’s also a viable Oscar contender for Best Picture. In this case that would be “Dunkirk.” But “Wonder Woman” has resonated this season when women’s struggles in Hollywood have been a paramount issue. A win here would be a chance to salute the female heroes behind the scenes. (Current odds: 3/1)

“Baby Driver” stunt ensemble — In a category saturated with war scenes and hand-to-hand combat, “Baby Driver” stands out from the crowd with its motor mayhem. It has also performed consistently throughout the awards season for its crafts, winning a Critics’ Choice Award for its editing and earning nominations from the BAFTAs, American Cinema Editors, and Cinema Audio Society. We might need to take it seriously in this race too. (Current odds: 20/1)