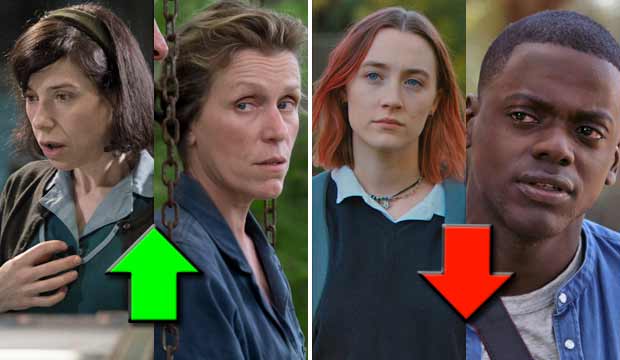 It was a busy weekend with the Producers Guild Awards presented on January 20 and the Screen Actors Guild Awards handed out on January 21. Both of those prizes have guided the way in the past when predicting the Oscars, and when they’ve agreed with each other they’re even more reliable when forecasting the academy’s Best Picture. Of course, those prizes didn’t correspond this year. So who’s up and who’s down after PGA and SAG weekend?

“The Shape of Water” — It grabbed a crucial victory for Best Picture at the Producers Guild Awards on Saturday night, which was especially important because its ensemble cast wasn’t even nominated at the SAG Awards. Eight of the last 10 PGA winners have gone on to win the top Oscar. Of course, those two exceptions to the rule were the last two in a row. Two years ago “The Big Short” won PGA and “Spotlight” won Oscar. Last year “La La Land” won PGA and “Moonlight” won Oscar. So maybe the Producers Guild isn’t as reliable a barometer as it used to be. Then again, the PGA Awards use the same preferential ballot the Oscars do for Best Picture, which favors consensus choices over passionate picks. That bodes well for “The Shape of Water.”

“Three Billboards Outside Ebbing, Missouri” — Just like “Spotlight” two years ago, “Three Billboards” lost the PGA Award but won for its ensemble cast at SAG. Will it win the Oscar for Best Picture the same way? It’s more divisive than “Spotlight” was due to its handling of racial and law enforcement themes, which could hurt it on the kind of preferential ballot that “Shape of Water” just won, but those criticisms haven’t slowed it down so far, and it’s the only film that hasn’t missed anywhere. It has received all the crucial nominations it needs to signal a Best Picture winner: Golden Globes, Critics’ Choice, Directors Guild, Producers Guild, Screen Actors Guild, ACE Eddie, and BAFTA. It’s missing from the Writers Guild Awards, but only because it was ineligible.

“Get Out” — Many thought this unconventional horror satire would win at the PGA Awards — myself included. And many thought its ensemble cast would win at the SAG Awards. To lose both isn’t necessarily a crippling blow since it wasn’t the odds-on favorite to win either award, but they were missed opportunities for the film to build momentum since it doesn’t have many nominations at the upcoming BAFTAs to give it a boost next month. However, writer-director Jordan Peele still got to take the stage at the PGA Awards as the recipient of the honorary Stanley Kramer Award. His politically charged speech, in which he connected “the sunken place” to the Donald Trump administration and a “system that silences the voice of women, minorities, and of other people,” upheld “Get Out” as one of the most culturally vital films in the awards conversation.

“Lady Bird” — The coming-of-age comedy started January on a great note by winning Best Film Comedy/Musical and Best Film Comedy/Musical Actress (Saoirse Ronan) at the Golden Globes. But it hasn’t won a single major precursor award since then. It was shockingly shut out at the Critics’ Choice Awards. Now it has lost at the PGA Awards and was shut out at the SAG Awards. Even former frontrunner for Best Supporting Actress Laurie Metcalf has started to be left behind. But the good will for writer-director Greta Gerwig and the increased attention this year on the inequality faced by women in the industry could still help the film resonate with Oscar voters going forward.