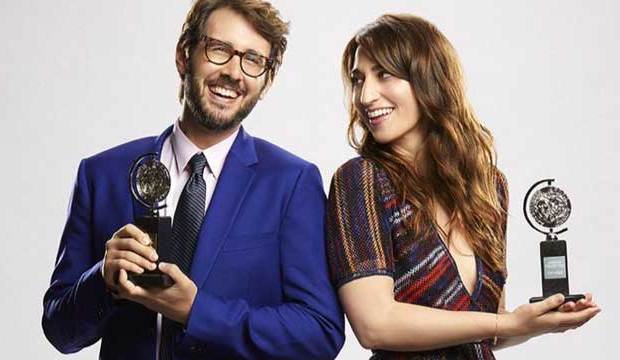 The Tonys start on CBS tonight (Sunday, June 10) at 8 p.m. PT and ET. While the telecast will go out live to TV viewers on the east coast, the show will be delayed for west coast theater fans. The ceremony takes place at Radio City Music Hall in Manhattan, just blocks away from Broadway. Two past Tony Awards nominees will be your hosts: Sara Bareilles (“Waitress”) and Josh Groban (“Natasha, Pierre and the Great Comet of 1812”).

Our official predictions have “The Band’s Visit” winning five Tonys, including the top prize of Best Musical. Another new tuner, “SpongeBob SquarePants,” will take two awards while the revival of the 1957 Best Musical champ “My Fair Lady” will claim four. (See the full list of predicted Tony Awards winners.)

On the play side of the aisle, “Harry Potter and the Cursed Child” will win six Tonys, including Best Play and Director as well as a sweep of the four design awards. The revival of the Tony-winning “Angels in America” will claim three of the four acting awards (lead Andrew Garfield and featured performers Denise Gough and Nathan Lane). And Glenda Jackson will cap off her return to the Broadway stage in “Three Tall Women” after an absence of three decades with her first Tony win.

Part of the appeal of the Tonys telecast is a chance to see performances from the nominated shows. All four Best Musical contenders (“The Band’s Visit” “Frozen,” “Mean Girls” and “SpongeBob SquarePants”) will be showcased as will the three Best Musical Revival nominees (“Carousel,” “My Fair Lady” and “Once on This Island”).